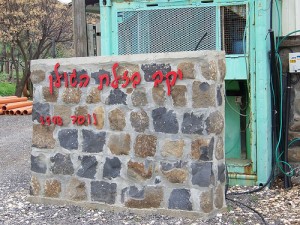 Unlike many of the wineries I have recently written about, Bazelet is one that I have already covered in some detail in the past.  That said, I last wrote about them over two years ago and much has changed at the winery, most importantly a noticeable step-up in quality.  My first indication of the improving quality was at the Sommelier Expo in November 2011 where I got to taste the newly released 2010 “regular” wines (reviewed below) and the 2009 Reserve labels.  During my quick visit to the winery this past winter and tasting some of the new releases, this feeling was reinforced and I was happy to see that the upward trend in quality is continuing.

Located on Moshav Kidmat Tzvi in the Golan Heights and named for the rich volcanic black rocky soil in which most of its grapes grow, Bazelet HaGolan winery was founded in 1998 by Yoav Levy and Assaf Kedem.  As with many other boutique wineries, Yoav started his path as a farmer growing Cabernet Sauvignon grapes and selling them to other wineries.  After doing this for over a decade, he was bitten by the winery bug and decided to start a winery of his own, utilizing some of the grapes grown on Yoav’s near 40 dunams of grapes for himself.  “Legend” has it that first made wine for his son’s Bar-Mitzvah, utilizing some leftover grapes from Shmittah and assisted by the Golan Heights Winery’s Victor Schoenfeld.  Once his homemade wine was overwhelmingly enjoyed by many, he started to think more seriously about commercial winemaking, including obtaining some professional training in Israel and abroad.  What started out as a pet project was initially conducted in his basement in the form hobbyist winemaking and slowly evolved into a full-fledged winery.  For the first few years the winery only Cabernet Sauvignon wines as these were the grapes that Yoav had been growing (and selling) historically.  In 2003 Assaf and Yoav parted ways and Assaf started his own (currently non-kosher) winery on the Moshav, known as “Assaf”.  Following Assaf’s departure, the winery became kosher for the 2004 vintage.  In addition to Yoav, the winery also employs two “cellar rats”, both originally from North America – Yechiel and Yaron.

Along with the changeover to kosher, the 2004 vintage heralded another change for Bazelet HaGolan, as the winery started to add a number of additional wines to it repertoire.  These included varietal Merlot and Chardonnay wines in addition to a number of blends.  Building on its typical hype and rush to purchase generated among the kosher consumers when any already recognized winery  becomes kosher, Bazelet HaGolan made number of successful wines in both the 2005 and 2006 vintages, including a delightful 2006 Reserve Merlot which I believe won a number of awards and was still drinking when I last tried the wine a number of months ago (as was the 2005 Reserve Cabernet Sauvignon).  However, 2007 and 2008 were not great years for the winery which seemed to be coasting on its initial reputation and the quality of the wine declined dramatically, leaving me with very little interest in the wines or incentive to seek them out (including some unfortunate experimentation with a new grape source that resulted in some bottles of the 2008 vintage being sold in Ikea for ~$5).  Thankfully and to their credit, starting with the 2009 vintage and continuing through the current releases of the 2010 vintage and 2011 vintage, the winery has rebounded and is once again producing quality wines worthy of your attention, palate and wallet.

The winery is a mid-sized operation currently producing about 80,000 bottles in two series – the Reserve label which usually spends about 20 months in oak and a table wine series labeled simply Bazelet HaGolan (sometimes referred to as “Bronze”) which typically spends about eight months in oak.  The winery also produced a flagship blend named Chushnia after the archeological site close to the winery.  Chushnia is a blend of 50% Cabernet Sauvignon and 50% Merlot, whose first vintage was in 2006 and the current vintage, I believe is 2008.  The wine is aged in oak for approximately 20 months and then spends another 10 months bottle aging in the winery’s cellar before it is released.  While specializing in red wines, I recently tasted and enjoyed their varietal Chardonnay, which is produced in an extremely limited edition (only 933 bottles made).  Similar to a number of other Israeli wineries, the individualistic style of Bazelet’s current winemaker – Yoav – is very evident in every bottle, enabling it to stand out among ever-growing number of kosher wineries.  The winery also produces a grappa that is very enjoyable as a digestif.

The winery is also building a new visitor center that will be located at the Amir Junction nearby, along with a restaurant, archeological site, cultural activities, parks and additional visitor centers for a number of other (non-kosher) winery’s located in Kidmat Tzvi.

Bazelet HaGolan, Chardonnay, 2011:  Only 933 bottles of this 100% Chardonnay were made.  It spent nine months in oak which helped to grant it many of the traditional Chardonnay toasty and other notes.  A bright nose of green apple, pineapple, white peaches, toasty oak, vanilla and some minerals is followed through on a medium bodied palate of tropical fruit, melon, stone fruit, more toasty wood, vanilla and chalky minerals; all balanced by good acidity that keeps the oak at bay and the fruit honest.  Rich, round and mouthfilling with a discernible, but in no way overpowering, oaky presence.  A medium finish rounds out this refreshing wine.  Drink now through 2014.

Bazelet HaGolan, Cabernet Sauvignon, 2010:  A medium to full bodied wine with nicely integrating tannins with a touch of bite that provide a nice backbone for the nose of lovely black fruit, baker’s chocolate, slight herbaceousness and spicy oak.  More black fruit and currants on the palate are joined by roasted Mediterranean herbs with good structure and balance between the bold tannins, characteristic fruit and hint of bitterness that pleases and leads into a medium finish of more oak, dark chocolate, tobacco and cedar.  A pretty wine that is drinking nicely now but could use some time to open in the glass at this stage and should cellar through 2016.

Bazelet HaGolan, Reserve, Cabernet Sauvignon, 2010:  A rich and deep nose of blackberries, plums, black cherries and cassis open this medium to full bodied wines, promising a gratifying experience ahead which doesn’t disappoint.  Robust tannins that are still integrating on the palate keep the ripe dark fruit in check and allow the oak to provide the necessary backbone for some nice aging.  Drink now through 2017.

Bazelet HaGolan, Merlot, 2010:  While not a traditional Merlot, this wine is very interesting and a refreshing change while still maintaining sufficient varietal characteristics to remain genuine while allowing Yoav’s terroir-based philosophy to come through.  A nice nose of mostly black forest fruit with some crushed red berries in the mix is bolstered with strong notes of anise and eucalyptus, together with toasty oak and warm Mediterranean herbs.  Much of the same on the medium to full bodied palate with gripping tanning that are just starting to integrate nicely with the fruit, providing a supple and solid backdrop for the wine and foretelling a nice bit of aging ahead for this wine.  A slightly spicy finish round out this wine.  While enjoyable now, I’d give the wine three months before enjoying (or some serious breathing time) and then enjoy through 2016.

Bazelet HaGolan, Reserve, Merlot, 2010:  With a rich nose comprised of mostly dark red forest fruit and crushed berries with a nice hint of herbaceousness on both the nose and medium-bodied palate buoyed by strong notes of slightly smoky oak, as with the “regular” version above, this is a delightful Merlot with a bit more bite than your traditional people-pleaser and a welcome addition at that.  Much of the same notes on both the nose and palate but more grace and less green notes than its younger sibling that combine to provide a substantially more elegant drinking experience.  Drink now through 2017.

Bazelet HaGolan, Reserve, Merlot, 2006: As noted above, the first Merlot from the winery and, notwithstanding being aged in oak only 10 months (as opposed to the customary 20 months for the Reserve series), it was included in the Reserve series based on its merits of being a single vineyard wine. Regardless of the reason, its title is well deserved as this wine is rich, muscular and powerful while still being very approachable and almost sexy. Very full bodied with a dark garnet color tinged with ruby at the edges. A spicy wine but well balanced by loads of fruit including raspberries, black fruit, light hints of blueberries and hints of vanilla, mocha and fine dark chocolate. Notwithstanding the wines relatively high alcohol content, no unpleasant “hotness” here but a complex, deep and interesting wine that it drinking beautifully right now.

Bazelet HaGolan, Cabernet Sauvignon, 2006: For a lower tiered wine this wine was a delightful treat and well priced to boot! Definitely one to search out and stock up on as a complex and interesting everyday wine which has improved in the last 18 months. Very approachable now, this medium bodied wine has soft and velvety tannins well integrated with hints of sweetness, blackberries, currants, plums and other red forest fruit with Mediterranean herbs running through as well lending it some “greenness” that is, in my opinion, one of the markings of Israeli terrior. A lingering finish of great rich espresso makes leaves you wanting more and more.

Bazelet HaGolan, Cabernet Sauvignon, Reserve, 2005: As great as the 2004 vintage was the 2005 vintage is even better! A beautiful and rich color, this full-bodied wine has almost sweet (and smoky) overtones and very well integrated tannins along with hints of spicy wood matched up nicely with the fruit. A velvety and caressing wine with juicy plums, blackberries and gooseberries on the nose and palate backed up by tingling hints of eucalyptus, musky wood and wet leaves on freshly turned earth leading into a medium to long, pleasantly bitter, finish.