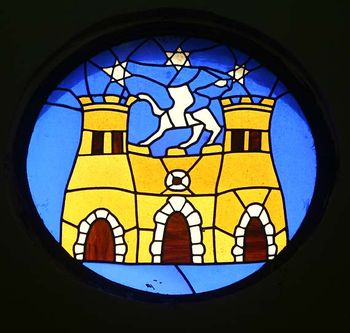 Taking advantage of this weekend to fortify ourselves for the coming Day of Atonement, this week’s newsletter focuses on one of Israel’s best wineries and certainly the one with the widest international recognition – the Domaine du Castel winery.  Given this newsletter’s proclaimed goal of introducing its subscribers to new wines and wineries with whom they may not have as much familiarity (in addition to encouraging folks to break out of the tried and true mold and experience a new varietal from time to time), the better known wineries end up with substantial less face time than they might otherwise deserve solely based on the quality of their wines.

Out of Israel’s more than 250 wineries, Castel is easily the one that requires the least bit of introduction.  After moving to Israel around the time of the Six-Day war and working in agriculture in Ramat Raziel for a number of years, Eli Ben-Zaken started Mama Mia in 1988 (a well-regarded Italian restaurant in Jerusalem of which I have many fond memories), and ran it for many years.  Feeling that Israel lacked sufficient quality locally made wines to serve at Mama Mia, Eli planted his first vineyards in 1988 – the harbinger of much greatness to come.  After making wine for personal use for a number of years, leaving management of the restaurant to his son Eitan and pioneering the development of the Judean hills as a serious oenological region, Castel was founded in 1992 by Eli as a commercial winery with an initial release of 600 bottles.  While the wines were well received, it wasn’t until a bottle made it to the head of Sotheby’s wine department in London – acclaimed Master of Wine and renowned expert, Serena Sutcliffe (who adored it), that Castel really hit it big on the international stage.

With success and acclaim, production grew and once the winery hit approximately 100,000 bottles it became kosher with the 2002 vintage (there was a kosher and non-kosher line that year) leading to the expected increase in production and sales.  The winery’s success and continued recognition stems from a number of factors including astute marketing and promotion, a consistent look and lineup of wines, quality and most importantly, individuality of the wines themselves.  While more common these days, Castel was one of Israel’s first, and for many years, only, winery producing “old-world” style wines, showcasing restrained fruit and relatively limited oak as opposed to the prevalent style of the times – blockbuster fruit and judicious use of mostly new French oak.

Notwithstanding 17 years of production, new wines are introduced incredibly infrequently with Castel’s current portfolio including only four wines: its top tier Grand Vin – a Bordeaux type blend aged for 20-24 months in oak, the Petit Castel, also a blend, aged for 16 months in oak and intended for earlier drinking, the “C” (100% Chardonnay) and its most recent addition – a crisply dry and refreshing Rosé.

A true family winery, Eli the founder is also the chief wine maker, with his son Ariel assisting with the winemaking and holding the title of CEO, his other son Eitan is the winery’s COO and his daughter Ilana manages the winery’s efficient exporting efforts.  The winery relies entirely on grapes grown in the area of the winery, mostly in their own vineyards which include Cabernet Sauvignon, Merlot, Chardonnay, Petit Verdot and small amounts of Cabernet Franc and Malbec that are included in certain vintages of both the Grand Vin and Petite Castel wines.  Historically, aging ability was the winery’s main Achilles Heel, but recent vintages have shown welcome improvement in this regard, a trend I expect to continue.

Domaine du Castel, Rosé, 2011: Following on the great success of their 2009 Rosé, this year’s version, while different than the 2009 vintage [resulting from a different wine making process], is truly delicious and provides the Israeli wine scene with something it has been lacking – a crisply dry and refreshing Rosé with enough depth and complexity to make it more than a refreshing summer quaffer (although, price aside, it excels in that department as well).  A blend of 60% Merlot, 20% Cabernet Franc and 20% Malbec (slightly unripe fruit that was cold-fermented).  A rich nose of red fruit including strawberries, raspberries and red grapefruit with much of the same on the slightly viscous palate where some pleasing minerality creeps in, coupled with judicious acidity that keeps the fruit in check and makes for great food pairing, all leading into a lingering and slightly bitter finish.  Its Achilles Heel is price (at $30 it’s a tad expensive for a Rosé), a common problem for Israeli wines.

Domaine du Castel, “C” Chardonnay, 2010:  After the controversies surrounding the 2009 vintage, with much of it reductive, I am quite happy that the 2010 is finally available, delicious wine that it is.  While its historic mantle of being Israel’s sole “Chablis-like” wine are over, it remains one of Israel best-crafted and individualistic white wines (although the white wines of Midbar (f/k/a Asif) will change that perception for you).  Made from 100% Chardonnay that spent 12 months in French oak, the nose is bursting with green apple, white peaches, citrus, hints of hazelnuts, cream and floral notes backed up by refreshing acidity and near-impeccable balance with more of the same on the round and mouth-filling palate that leads into a lingering finish with plenty of spicy wood, minerals and more citrus.

Domaine du Castel, Petite Castel, 2007:  An amazing wine that is second to the better-known Grand Vin in name (and price) only.  While the Grand Vin is a deeper, Bordeaux type wine, which will mature over the next couple of years, the Petit is an interesting wine, which, while it has aging potential, is a very approachable wine right now.  As with the Grand Vin, a traditional Bordeaux blend whose components and percentages vary from year to year with this vintage comprised of Cabernet Sauvignon, Merlot and Petit Verdot.  A rich and full bodied wine loaded with spicy toasted oak, mostly black fruits including blackberries, plums and sweet cassis and accompanied by nice Mediterranean herbs, near-sweet cedar wood, dark chocolate and tobacco leaf with a lingering finish of spicy wood notes of chocolate and mint.  While still enjoyable there is certainly no need to cellar this any longer and time to drink up any remaining bottles you may have.

Domaine du Castel, Petite Castel, 2009:  A medium bodied blend of 60% Merlot and 40% Cabernet Sauvignon that spent 16 months in French oak.  On a nose that takes a few minutes to open up but when it does it reveals rich notes of cassis, blackberry, eucalyptus, minerals and crushed sweet black fruit much of which continues on a round and mouth-filling palate with the addition of dark baker’s chocolate, a hint of red fruit joining the black, cedar and slightly sweet oak.  A long lingering and incredibly smooth finish with bittersweet chocolate, cigar-box, smoke, some spicy wood and pleasantly tingly bitterness at the end.  A very well balanced wine with good structure that should help the wine improve over the next few years.  Drink now through 2015.

Domaine du Castel, Grand Vin, 2006:  At its release, the 2006 was easily the best Grand Vin to date.  While that success has since been surpassed by both the 2007 and 2009 vintages, and many would argue the same about the 2008 vintage as well, the 2006 remains a stunning wine that is drinking magnificently these days and would be a real Moshiach wine, proper for any holiday table.  One possible reason for the wine’s ability to standout was the dramatic shift from Castel’s traditional Bordeaux style (to which they [more-or-less] reverted to with the 2007 vintage reviewed below), to a more fruit-rich Californian wine with great acidity backing up the fruit.  The wine provides a delightful experience wrapped in a full-bodied, rich, supremely elegant and complex wine.  A silky smooth wine with velvety tannins coating the palate and opening up with black forest fruits (that transition to more red as the wine opens up), plums and a spicy underlay.  After a few minutes, the nose reveals rich cassis and green notes of eucalyptus, anise and spices all backed up by generous yet judicious toasted, very much in balance with the fruit and acidity.  A very long finish that carries a hint of mint along with the earthy overtones and some bitterness.

Domaine du Castel, Grand Vin, 2007:  Starting with its release and continuing to this date, the 2007 vintage has been easily been my favorite vintage of this near cult wine (by Israeli standards).  While the blend changes year to year (and the 2009 is substantially more accessible than usual – see my note below), the wine is usually a classic Bordeaux blend, with this year’s wine comprised of mostly Cabernet Sauvignon and Merlot, with small percentages of Petit Verdot, Cabernet Franc and Malbec added that spent nearly two years in new French oak.  Deep and rich, with plenty of black fruit, but tempered by the French character Eli likes so much.  Then the heavy dose of toasted oak comes through with a touch of smoke, and the elegance shows itself and we are reminded what we are drinking.  A rich nose of black fruit, Mediterranean herbs, rich espresso, toasty oak and hints of green olives, eucalyptus and licorice all combine for a characteristic Castel nose that exudes elegance and leads to a full bodied, rich and round palate with more of the same leading into a long finish of spicy wood, tannin, dark chocolate and a green note on the rising finish.  The wine is drinking beautifully right now and should continue to cellar nicely through 2016.

Domaine du Castel, Grand Vin, 2009:  In a manner quite different from past vintages, the wine is extremely approachable right out of the bottle with the traditional toasty oak taking somewhat of a backseat to the rich fruit and the tannins surprisingly well-integrated at this early stage.  A traditional Bordeaux blend of 70% Cabernet Sauvignon and 25% Merlot, fleshed out with 5% Petit Verdot, the wine is delicious.  Exhibiting Castel’s trademark balance, the wood, fruit and acid component meld together harmoniously, creating a really elegant wine.  Plenty of rich black fruit on the aromatic nose accompanied by tobacco leaf, a nice green streak of eucalyptus and mine and layered with good dark chocolate, spicy wood and supple tannins.  As the wine is really drinking amazingly right now, the only reason to wait would be to enjoy its development over the next five or six years, as the wine will evolve a bit more.