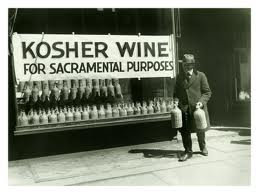 While this newsletter’s primary audience always has been and will continue to be the sophisticated wine drinker, the upcoming Purim holiday made me realize that I have been ignoring a rather large group of wine consumers who are richly deserving of some newsletter attention – the lovers of heavy, extra sweet, viscous wine. I am obviously not referring to that lessor category of sophisticated dessert and fortified wines like Sauternes and Port but rather to heavy, specially sweetened sacramental wines.

Looking back on the history of wine, one of its earliest and most common uses was for sacramental purposes. There are plenty of references to wine throughout the bible and later Jewish (and other) religious texts where wine was used for sacramental purposes and I can assure you, the references are not to a subtle and layered Bordeaux-blend or a muscular Shiraz from down under.

Most sacramental kosher wine is referred to as “Kiddush wine” as it is primarily for Kiddush – the blessing made over wine to sanctify the Shabbat. Most of these wines are made from the Concord or Muscat grape which, given the complexity, longevity and overall deliciousness of these wines, should clearly have been included in the list of “Royal Grapes” (what do Cabernet Sauvignon and Chardonnay grapes have over these?) Unlike their table-wine brethren which pride themselves on making a different wine each vintage year, these producers take extra care in selecting only the highest grade grapes in their cellars regardless of vintage year, carefully blending them into the marvelous beverages you see reviewed below – as such, they are all non-vintage wines (a label also conferred on some of the most delicious Champagnes).

Two famous religious figures of the 16th century were prominently engaged in viticulture – the great Jewish Tzadik Rashi who produced still wine and the monk known as Dom Perignon who, according to legend, discovered the methodology for producing and created the first sparkling wine. Both these famous ancient vintners lived and worked in the Champagne region of France and, as befits their incredible accomplishments, both have monumental oenophilic institutions named after them – “Rashi” being the label of kosher wines of incredible quality, finesse and sophistication and “Dom Perignon” being the flagship label of one of the world’s largest Champagne producers – Moët et Chandon.

Another famous religious figure of impeccable taste when it came to wine (among other things), was the Rambam – a huge Tzadik, hailing from Spain who found the time to be a practicing Rabbi, an Aristotelian philosopher and practicing physician to the Egyptian court, a true “Renaissance Man” (who predated the Renaissance). The Rambam’s tastes are clearly evidenced by his insistence that wine had to be red, non-mevushal, undiluted by water, non-sweetened by sugar and unaffected by unpleasant tastes (TCA anyone?) including those from mold, vinegar, bacteria or oxidation.

I would note that the habit of using sweet red wine for Kiddush purposes is primarily a tradition of Ashkenazic Jews who lived in countries where consumption was less of an art form, whereas Sephardic families who grew up in France or French-influenced countries, grew up in a society where drinking dry wine was an integral part of their culture and therefore, for the most part, would use wines noted in any of my previous 116 newsletters for their Kiddush purposes over those listed below.

I have listed below some of the finest Sacramental wines, all worth seeking out both for immediate drinking and cellaring in order to follow their development over the next couple years (or decades). As an added bonus all of the following wines are all YH Best Buys!

Yayin Yashan Noshen (“Old & Aged”), n.v: Ask anyone who served in the Israeli army prior to 2006 and they will tell you that this wine was unequivocally the highlight of their weekend for anyone unlucky enough to have remained on base for Shabbat. Known affectionately as Yayin Patishim (Hammer Wine) due to the fact that drinking this wine in any quantity left you the next day with the pleasant feeling of having been hit in the head with a hammer. I recently learned from my brother that the Israeli army made the catastrophic decision to cease using this wine for Kiddush and switched over to the world’s undisputed top grape juice – Carmel’s Tirosh. While I am sure soldiers around the country have been mourning this decision (for many reasons), clearly the worst part of their decision is the loss of a wine that matched perfectly with the delectable Shabbat fare served at army bases around the country that typically includes 20-30 different eggplant based dishes, fresh chicken breasts breaded and fried in white wine and small quantities of extra virgin olive oil, nib of mystery meat, gelatinous mounds in all ranges of neon colors. Know now – you are sorely missed. Fortunately for the rest of us, both the Zion and Arza wineries (both originally part of the famous Shor Winery) continue to make and produce this timeless classic and it is available at every Israeli supermarket in the fine wine section (usually located between the turnips and the Tapozina).

Carmel, King David, Concord: This is the Kiddush wine I grew up with, that was and continues to be an irreplaceable part of my family’s Kiddush experience. Being the traditionalist that I am, even after I started to seriously enjoy much dryer wines at the age of 16, I continued to use this wine for Kiddush for many many years. I only recently gave up this tradition and started to use dry wine at Kiddush at the insistence of Zevi (my 3 year old son) whose palate cannot handle such delectable treats and is unfortunately calibrated to enjoy dry wines. This wine is a sweet, smooth and delectable treat with a nose of raisins, dried fruit, and some cherries, with hints of nuttiness and a short to medium finish. A great wine to pair with robust traditional Shabbat treats like roast chicken, sweet and sour brisket or veal chops, the wine also pairs nicely with cheesy dishes. As opposed to some other wines of this genre, the not-overly-sweet taste is balanced by good bracing acidity.

Manischewitz, Concord Grape, n.v: While I am sure they make hundreds of products, Manischewitz is primarily known for two things – Matzo and wine. They sell millions of bottles of Concord grape around the world and for decades were considered synonymous with good kosher wine – lending their quality brand to kosher wines around the world and elevating them to an existential level. Enhanced with loads of delightful sugars and robust Concord grape flavor, this wine is a magnificent example of a traditional sacramental wine. So much so that Manischewitz become genericized with this type of wine. A match to Challah and great for extinguishing the Havdalah candle at the end of Shabbat, it has a nose and palate that recollects everything we have come to love about the Concord grape. A nose of raisins, plums and alcohol so strong that you could probably become intoxicated from standing in the same room as an open jug. 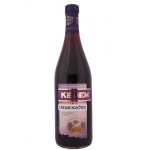 Kedem, Malaga: Kedem is owned by the same folk that give us many of the treats I have discussed in prior editions, but this one beats them all hands down! While not quite in the same league as Manischewitz, Malaga has also become synonymous with extra heavy and sweet wine. A somewhat viscous wine that evokes memories of home, wraps you in its heady aromas of cherries, plums, raisins and specially added extra sugar. A great match to desserts such as fresh fruit, chocolate babbka , the wine also matches nicely with just about everything else (although I wouldn’t try matching it with wasabi). Also highly recommended – the Cream Malaga version!

Kedem, Concord Grape: Another hit from the House of Kedem with slightly less alcohol than the Malaga above. A great match to heavily frosted chocolate cake or rugalach. The loads of fruity flavors that mix nicely with the sugars make this a keeper, and a wine that should cellar nicely for another 15-20 years. Also good for slow-sipping as an after-dinner aperitif.