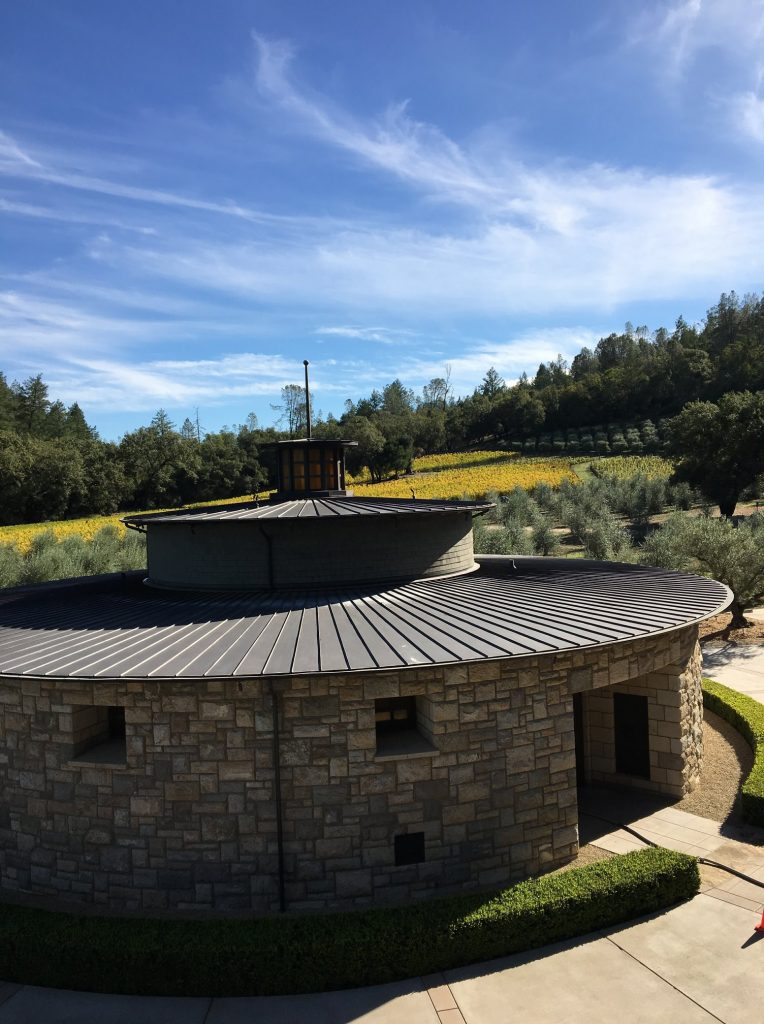 Visit November 14, 2017
Located in the heart of Napa Valley (in St. Helena), the foundation of the winery dates back to 1862 when the vineyards were planted. Throughout the property’s history, the quality of the vineyards was always recognized, with grapes being sold to many prestigious wineries. Acquired in 2006 by Maurice Marciano (co-founder and owner of Guess jeans) who poured substantial resources into making the winery the best possible estate winery it could be. After not being satisfied with his initial 2006 vintage results, Maurice decided to do a total overhaul starting with the hiring of David Abreu, one of Napa’s top viticulturists (who advises many of Napa’s top wineries including Harlan and Screaming Eagle) as a consultant. Following his instructions to the T, the winery uprooted all 20 acres of vineyards and replanted only ten acres with varietals (Cabernet Sauvignon, Cabernet Franc, Petit Verdot and a tiny amount of Merlot) and rootstocks deemed most appropriate for the terroir. Reducing the grape growing acreage by 50% significantly lowered production and the ability to recoup the investment but enhanced quality 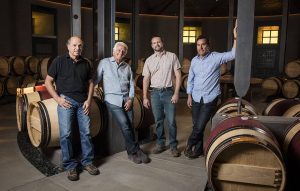 dramatically as David determined ten acres was the most the land could accommodate while still producing the highest quality grapes.
Adding to the star-studded team was Andy Erikson (Screaming Eagle winemaker and consultant to many other high-end Napa wineries) who in turn brought on Morgan Maurèze as full-time winemaker. Morgan worked with Andy for nine years. Born in France and raised in the US, Morgan was educated at UC Davis and University of Bordeaux with winemaking stints in both France and California at wineries like Petrus, Domaine de la Romanée Conti, Château Haut Brion and Dominus Estate. Just in case that wasn’t enough star power for you, the team also utilizes the consulting advice of Michel Rolland.
Spending top dollar didn’t stop with the team and the winery acquired the most advanced and hi-tech winemaking equipment on the market. A top architect was hired to design one of the most gorgeous structures I’ve seen in an American winery which incorporated the winery’s ancient style while giving it an updated modern twist. The circular barrel room is breathtaking and the 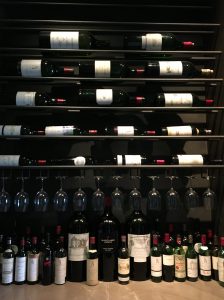 tasting room overlooks the barrel room, vineyards and an outdoor fireplace that enhances your entire experience. Maurice also planted olive trees from which the winery makes its own branded olive oil.
Despite all of the time, money and effort Maurice has sunk into the project, the winery doesn’t function like a commercial winery. Generally speaking, the winery isn’t open for visitors, much of the production is used by the family and the entire estate 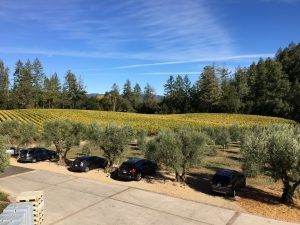 does double-duty as Maurice’s vacation home with lush grounds, tennis courts, a swimming pool and guest villas available for his family and friends. even the astoundingly beautiful tasting room where we sampled the wines is primarily used to host functions and special events (the entry way is stocked with some of the world’s greatest wines, all sourced from his private collection.
A proud Jew, Maurice decided early on to make kosher wine so that he could share it with family and friends. once he had proof of quality concept with the 2012 vintage (his first “commercial” vintage after making wine in 2010 and 2011 that wasn’t released as Maurice didn’t feel the quality was up to his standards – it was labeled Madrono after the original estate name and to avoid using Marciano on wine not yet up to par), he first made a kosher wine for the 2013 vintage. When starting kosher production, Maurice’s philosophy of excellence continued and he acquired new equipment to enable total kosher production independent form the rest of the winery’s equipment (many other wineries making kosher runs, share equipment which requires kashering the equipment and often makes the kosher run a step sister as it waits its turn for the regular wine to finish, sometimes losing the optimum window for production).
Marciano Estate has four wines in their current portfolio. Massiglia (a limited production Sauvignon Blanc), M Cabernet Sauvignon, the flagship Marciano Estate and their one kosher wine – Terra Gratia. Still relatively new, the winery is still settling into its labeling and there have been some changes over the years. There has been kosher and non-kosher versions of the Terra Gratia in addition to a red Massiglia which seems to have been replaced by the “M Cabernet Sauvignon”. All the red wines are primarily Cabernet Sauvignon, usually (but not always) blended with Petit Verdot and Cabernet Franc (the M has a much larger 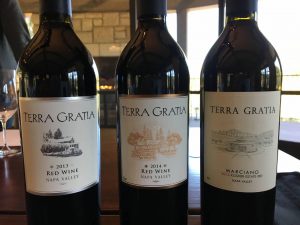 percentage of Cabernet Franc than the Estate). Starting with the 2016 vintage, the winery expected to bottle a kosher version of the winery’s flagship Marciano Estate as well (sourced from a different parcel than the non-kosher). I tasted the wine from the barrel last year but no final determination had been made at that time.
Initially representing 5% if the winery’s total production of approximately 12,000 annual bottles, that number has grown to nearly 30% for the 2017 vintage. Royal Wines is the current distributor, which enabled Marciano to achieve wider distribution but the 2013 was self-distributed and flew under the radar for a while (Maurice is also the co-owner of Wally’s (a large West Coast chain of liquor stores) which enabled him to move the wine on his own).
Reflecting its desire for privacy, the winery’s address is unlisted and nothing on the exterior fence hints at the treasures lying within. After meeting Morgan a year earlier at KFWE LA, I reached out to arrange a visit and was assisted by the kosher winemaker who met me at the winery with Morgan where we went on a quick tour of the winery before heading to the barrel 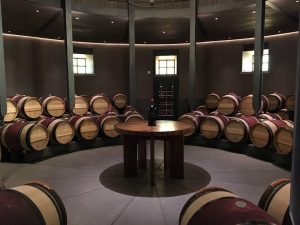 room. There we tasted a barrel of 2017 Cabernet Sauvignon likely destined for the Estate wine along with a few other barrels of Cabernet Sauvignon from the 2016 and 2017 vintages and one blended barrel of 2016 co-fermented Cabernet Sauvignon (85%) and Cabernet Franc (15%).
After finishing in the barrel room (which also hosts the winery’s archive (see pictures)), we heading to the magnificent tasting room for a vertical of the three kosher Terra Gratia wines. 2013, 2014 and an advance tasting of the bottled but not yet released (at the time) 2015. Despite it being only the three of us tasting three wines, the winery’s professionalism was obvious with the printed personalized menu of wines along with materials providing relevant information about each of the wines (in addition to having Morgan walk me through each of them).
As one would hope with a newish winery, I found each subsequent vintage to improve on its prior while starting with a really lovely 2013 (blended with 10% Cabernet Franc) that had an elegant structure with plenty of rich controlled red fruit, herbal 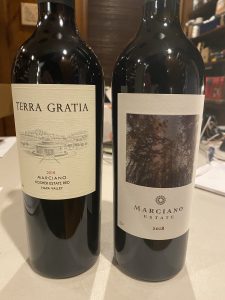 nuance, dark chocolate and was well balanced with subtle oak, good acidity and nicely integrating savory tannins. The elegance was upped for the 2014 version which was 100% Cabernet Sauvignon and had more black fruit and less new oak than the 2013, with the lower oak treatment noticeable with purer fruit, more minerals and cleaner lines. The 2015 was rich, expressive and voluptuous with lovely spices and subtle smokey notes – more complex and approachable than either of its two predecessors – it was my favorite of the three wines I tasted – all of which I enjoyed.
A belated thank you to Marciano Estate Winery,Morgan Maureze and DL for hosting me and I am very much looking forward to the kosher Marciano Estate and hopefully one day, a kosher version of the Sauvignon Blanc as well!