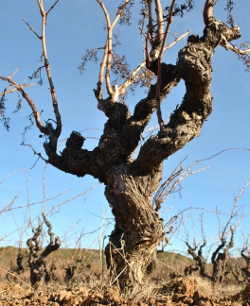 Carignan has been planted in Israel for over 100 years but it is only recently that this difficult grape has started to yield delightful results, proving that Israel’s early settlers might have been onto something after all, even if it took 100 years for their plans to come to fruition.

Believed to have originated in Spain where it historically was used in Rioja wines, it has been a primary part of Israel’s wine industry for almost 130 years. After Algeria achieved independence from France in 1962 and the French were deprived of the massive amounts of cheap Algerian Carignan, it was widely planted throughout France to compensate, ultimately becoming a contributor to France’s “wine lake” (see newsletter #200). In today’s France it is mostly utilized for their vin de pays (table wine). Recent years have seen it gain renewed prominence in Spain where concentrated wines from old bush vines are making beautiful music in the Priorat region.

While relatively lacking in flavor and personality, Carignan has a number of attributes that contributed to its prominence and abundant plantings including its prominent color and high levels of tannin and acid which make it a good blending agent. However, its high yield was the primary factor in Carignan being so widely planted during the 1880s through the mid 1970s (when it represented more than 50% of all grapes planted in Israel) despite the valiant attempts by the Baron Rothschild to get the burgeoning Israeli wine industry to plant the noble Bordeaux varieties of Cabernet Sauvignon and Merlot. In those days quality was less important than the quantity needed to provide sufficient grape juice and sacramental wines. As a late bloomer, Carignan requires a warm climate to fully ripen and is truly fit for Israel’s Mediterranean climate. However, in many ways it is a difficult grape being highly susceptible to mildew and rot and with thick gnarly vines that make mechanical harvesting extremely difficult.

As the trend in Israel has shifted towards more Mediterranean (or Rhone) varietals such as Syrah, Cabernet Franc, Grenache and Mourvedre to name a few, Carignan started to look better and better to many local winemakers and they started revitalizing existing Carignan plantings and drastically reducing yields. As I have mentioned a number of times in the past, I think it could be one of Israel’s needed “signature grape” and it’s certainly as close to an indigenous varietal as Israel has. With the added benefit of having relatively (for Israel) old vines available, winemakers started creating high-end Carignan wines that surprised and delighted – both blends (typical blending partners being Syrah, Grenache and Mourvedre) and single-varietal wines. Carmel kicked off the trend with their old-vine Carignan released under the Appellation label (the 2007 vintage of this wine is reviewed below) followed more recently by Recanati, Binyamina, Yaffo and Gat Shomron (a number of non-kosher wineries produce it as well including Vitkin and Avidan).

In general, the older the vine the more concentrated the wines and with Carignan the extra aging allows the grapes to develop both flavor and personality. Carignan may also be considered a “wine maker’s grape” as it is a good reflector of terroir and its high tannins and acid make it a challenge to coax finesse and elegance out of it. It also suffers from excessive oak, matching a more recent trend of many Israeli wine makers to try and diminish the amount of oak influence in many wines.

Listed below are a number of Carignan wines I enjoy, both single varietal wines and a few blends with high levels of Carignan.

Recanati, Reserve, Kerem Ba’al, Carignan, 2009: Given the success Carmel has had with its Old Vine Carignan (reviewed below), it was only a matter of time before more awesome expressions of Carignan found its way to the market. In addition to being over 30 years old, these are true bush vines from the Judean Hills, that have flourished since their planting without any irrigation, pruning, support (known as the “goblet” system) or other methods of human meddling (Ba’al is loosely Hebrew for wild). As would be expected, these are low-yield vines of less than two tons per acre and Gil and Ido have produced a wine that gracefully straddles power and elegance. Muscular tannins that needed half an hour to an hour to soften up in my glass and allow the fruit and spice to shine through but very much in balance with the fruit. Plenty of blackberries, currents and other black forest fruit along with warm spices, chocolate, espresso, white pepper and anise on both the nose and palate, with a good jolt of balancing acidity leading into a medium finish that lingers nicely. The fruit is on the restrained side and elegant, which is consistent with Recanati’s recent direction away from fruit forward wines towards retrained Mediterranean elegance. Very different and delicious, this wine is another candidate for some serious cellaring. A limited edition wine with about 5,900 bottles produced. Drink now through 2015.

Carmel, Appellation, Carignan, 2007: The Carignan grape was probably a significant contributor to Carmel’s prior horrific reputation for terrible wines since it was a major component in cheaper and unappealing wines (i.e. sacramental wine). This wine really puts the much maligned grape in a whole new (favorable) light. Using grapes from 40- year-old vines and blended with some Petit Verdot for good measure, this wine has great fruit and is slightly spicy with hints of espresso and a nice finish. Not many folks do well by this grape but Carmel certainly does. While this wine will cellar nicely through 2013 at least, it is drinking beautifully right now and there isn’t any reason to wait to enjoy it.

Binyamina, Reserve, Carignan, 2009: Carignan has quite a history in Israel (see newsletter #162), and until recently was not anything to talk about publicly. As Israel tries to find its rightful place in the wine world, moving away from California to its Mediterranean roots, creative Israeli winemakers like Assaf Paz are finding that there might have been a good reason for all that Carignan planting that went on in Israel over the last 100 years (Recanati’s Gil Shatsberg is another one and we benefited from his creativity with their recent release of a special wine reviewed in newsletter #186)) and this delicious wine is the result of his explorations. The first time Binyamina released a Reserve Carignan and a[nother] rousing success for this rising phoenix of a winery (discussed in newsletter #158). Made from 100% Carignan grapes that spent 12 months in oak, this is a full bodied and muscular wine whose power has been nicely reined in with gentle, near caressing tannins that play nicely with the black cherries, fruit and warm spices creating a near-elegant wine (with plenty of brawn though), which is surprising for a varietal not known for its elegance. A nice touch of earth, roasted coffee beans and leather joins the fruit, tar and smoke on the palate leading into a nice medium finish that pleases. Drinking really nicely now, this wine will cellar nicely and improve a bit through 2016.

Yaffo, Carignan, 2009: Another relatively newly kosher winery from the Judean Hills, I have recently enjoyed a number of Yaffo’s wines and picked this one up on whim to be enjoyed over Shabbat on a recent trip to Israel. A rich a deep purple color as benefits the varietal, this medium bodied wine has a rich nose of blackberries, black cherries and purple plums together with some spiciness and rich tannin. More of the same dark fruit on the palate along with a hint of spicy oak, some cedar and warm crushed herbs lead into a medium finish that lingers nicely with some pleasing bitterness. Enjoyable now, the wine should cellar for another year or so.

Carmel, Mediterranean, 2007: Over the last couple of years, one of the hot discussion topics among Israeli/kosher wine aficionados has revolved around marketing practices for promoting the excellent Israeli wines beyond their current and natural “kosher” niche. Current prevailing wisdom is that in order to succeed, Israel needs to find an Israeli varietal that would help Israeli wines be promoted as Israeli/Mediterranean (as opposed to Israeli/kosher) – i.e. wines from Israel that are representative of Israel’s unique terrior and characteristics. Additionally, Carmel (together with other Israeli wineries) is following the worldwide trend of moving away from internationalized powerhouse wines to a more elegant style. As mentioned above, Carmel is at the forefront of this revolution and this wine (evidenced by its name) is a premier example. An interesting and elegant blend of 37% Carignan, 26% Shiraz, 20% Petit Verdot, 15% Petite Sirah and 2% Viognier, with the various varietals coming together beautifully. The sum is far greater than the parts as each grape contributes some of its unique persona to a great wine. Loads of fruit on the nose including plums, raspberries, cranberries and cassis, together with velvety and near sweet tannins. The palate mostly follows the nose with the pleasing addition of milk chocolate, earthy forest floor, cedar box, warm spices and tobacco leaf, which all blend together into an extremely well balanced and pleasing medley flavors. A long and caressing finish rounds out this delightful wine.

Binyamina, Yogev, Rosé, 2010: While I feel like Binyamina’s Yogev series is a mixed bag with different wines being better in different vintage years (my more-or-less consistent favorite being the Cabernet Sauvignon-Petit Verdot), their Rosé is usually a good bet for something good but a little different. As it was with last year’s vintage last year, the wine is comprised of a blend of 60% Malbec (yet another varietal that is having some recent success in Israel) and 40% Carignan. A medium bodied wine with a nice nose redolent of tangy raspberries, black cherries and some spices all of which continue on a refreshing palate of fruit, some leather and a healthy dose of acid that keeps things refreshing and presents a Rosé unlike “all them other Rosé s” –in a good way. A medium long finish rounds this one out. This wine has the added benefit of being relatively cheap earning it a YH Best Buy.