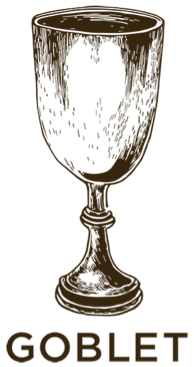 Goblet Winery, provides a window into a story of passion, following one’s dreams and urban development – all coming from unexpected places.

Founded in 2013, Goblet released its first commercial vintage in 2014 but founder and winemaker Yanky Drew has been making wine for over a decade, both as a hobbyist home-winemaker and also as assistant winemaker at City Winery, the ultimate urban winery. Founded in 2008 by Michal Dorf (of Knitting Factory fame), the original SoHo location has grown to encompass a number of locations around the country, which seamlessly blend urban winemaking, great ambiance and terrific music into a successful business venture whose growth has been carefully nurtured over the 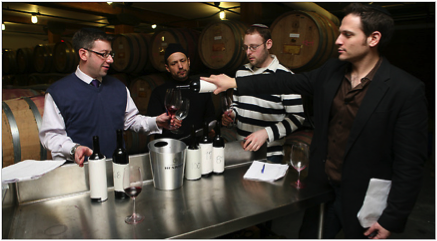 years. Having been acquainted with a number of City Winery’s initial investors (most of whom made private barrels of kosher wine as part of their investment), I have been acquainted with City Winery and its operations since the very beginning. Early on, we conducted the blind tastings for the Jewish Week’s annual Kosher Wine Guide at the winery and I spent a fair amount of time with the winemaking team (that tasting got written up in the New York Times).

In addition to chief winemaker David Lecomte, the winemaking team included Ilan Tokayer (z”l) as the kosher winemaker. Yanky joined in 2009 to assist Ilan who left shortly thereafter to intern in New Zealand, elevating Yanky to primary kosher winemaker (shortly after his return to start his winemaking studies at UC Davis, Ilan tragically passed away way too early). In addition to his substantial responsibilities of assisting David in all aspects of the winemaking process (which expanded as City Winery expanded around the country, requiring more and more of David’s time to be spent out of the original New York City location), Yanky was responsible for all the kosher winemaking, which included the private label barrel program (for investors and others) and the kosher wines made for City Winery itself.

At first glance Yanky, who is (and dresses like) a Chareidi Jew from Brooklyn doesn’t seem like someone you would expect to be making high-quality wines at two different wineries. Growing up in 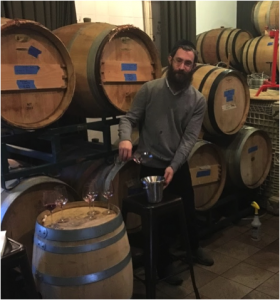 Monsey, wine was always part of the family’s Shabbat celebrations but it wasn’t until he went away to England to learn in a Gateshead yeshiva that he was bitten by the winemaking bug (although he’s mentioned that as a kid he used to try and turn table grapes into wine with little success and pointed to a tasting in Israel of the Yarden Gewurztraminer from the Golan Heights as another turning point in his interest in wines and winemaking). One of the rabbis in a neighboring yeshiva needed some assistance in producing his homemade wine and after volunteering to help out, Yanky found himself mesmerized by the entire process. Returning home, Yanky was determined to pursue his newfound passion and interned with a number of local wineries. It was in conjunction with an internship at New York’s North Fork Palmer Vineyards that he made his first (tiny) batch of wine for the 2005 vintage, using Merlot grapes “earned” from his internship work. Energized by the initial experience, Yanky continue to pursue his home-winemaking hobby and his search for wine barrels introduced him to City Winery through Ilan, which ultimately provided him with his winemaking day job (and the place where he continued his winemaking education under David Lecomte) as Ilan told him about the vacancy he ended up filling. 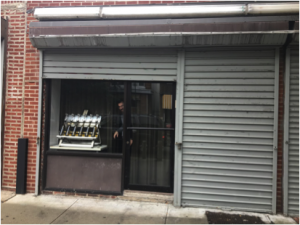 Having continued to make his own wine continuously, in 2013 Yanky founded Goblet as his own label and, taking a page from City Winery’s pioneering urban winery playbook, opened up shop in a Brooklyn storefront in 2014. Leveraging his connections with wineries around the world (primarily (but not only) through his work at City winery), Yanky sources his grapes globally, with the diverse range of grape-growing regions including Mendocino and Napa Valley (California), Finger Lakes (New York), Mendoza (Argentina) and Chile.

Annual production has remained more or less constant at approximately 15 barrels (4,500 bottles) annually, which is close to capacity for the small space the winery currently occupies. Even now, during harvest and production times the sidewalk and parking spots right outside help accommodate the extra equipment and vehicles necessary and which cannot fit into the meticulously organized winery. Sales are currently via the winery’s website, a few selected wine stores (like Skyview in Riverdale) and online at kosherwine.com. If Goblet wants to grow (likely necessary as word continues to spread and sales grow) it will outgrow its space in short order.

Yanky prefers to showcase the fruit and produce varietaly “correct” wine to the best of his (and the grapes’) ability. As such he rarely blends and tries to obtain the best fruit he can from the regions known for the particular varietal in question – to the extent possible (e.g. Malbec from Mendoza, Cabernet Sauvignon from Napa Valley and Riesling from Finger Lakes). While there are obvious limitations when fruit is sourced from thousands of miles away, the quality winemaking and attention to detail helps smooth over many of the potential pitfalls. Over the years Yanky has expanded his offerings to include a wide array of varietals including Cabernet Sauvignon, Cabernet Franc, Carménère, Malbec, Merlot, Pinot Noir, Syrah, with Riesling the most recent addition to the mix. Historically, much of his fruit was sourced from a top source in California’s Mendocino County with more recent offerings coming from a more diverse range of locations around the globe, including Argentina, South Africa and Chile in addition to other areas of California, including the well-known Alexander Valley. 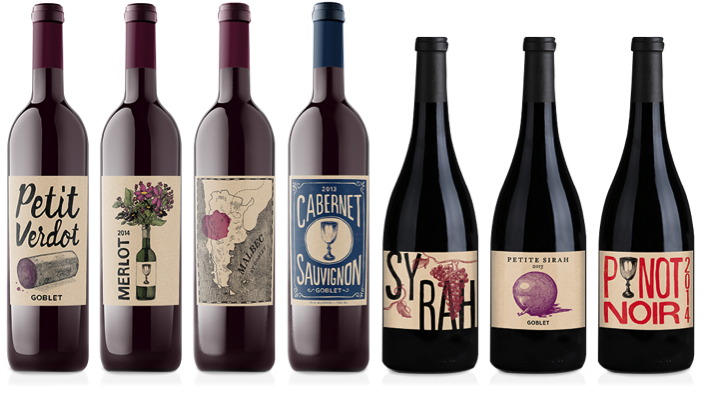 While still early in the process of determining the winery’s path forward, Yanky considers his “regular” offerings (i.e. those expected to be produced annually on a regular basis) to be varietal Merlot, Syrah, Pinot Noir, Malbec, Cabernet Sauvignon and Riesling on a regular basis with additional wines in the experimental phase (whose future will be determined based on the resulting wine’s quality and consumer reception) including Petit Verdot, Petit Sirah, Cabernet Franc, Carménère, Grenache and a sparkling wine made in the méthode champenoise. The bright and bold labels designed by Yanky match the wine’s style, with plenty of rich fruit and bold flavors. The wines aren’t divided into series and each wine is a stand-alone product (subject to the regular versus occasional concept mentioned above) with the reds all being priced basically the same and the one white (Riesling) priced lower.

In addition to the Goblet-branded wines, Yanky also offers folks the options to make private-labeled wines, a growing phenomenon within the kosher wine market as consumers continue to seek out unique wines, not widely available (despite the vast majority of these options being commercially available wines with different labels as opposed to truly bespoke wines). As of now, all the wines are only available in the US but are worth seeking out, as is a visit to the winery, located in the heart of Brooklyn. For more info, check out the winery’s website at http://www.gobletwine.com/. Listed below are some of the recent Goblet wines I have tried and enjoyed. On my recent visit to the winery I also tasted the many barrels waiting to be bottled, some of which have subsequently been bottled including the 2015 Mendocino Syrah and Merlot, the 2016 Mendocino Syrah and Pinot Noir along with the 2016 Cabernet Sauvignon from Napa Valley’s Stagecoach vineyard (all wines I tasted in the barrel and will re-taste now that they have been bottled). Remaining in the barrel as coming attractions are wines from 2015 (Merlot [Chile]), 2016 (Merlot, Malbec [both Mendocino] and Cabernet Franc [Chile]) and 2017 (Pinot Noir, Malbec and Merlot [all Mendocino], Cabernet Sauvignon [Alexander Valley and South Africa], Cabernet Franc and Carménère [both Chile]).

Goblet, Riesling, Seneca Lake, 2017: The grapes for his first Riesling (which will recur for the 2018 vintage) were sourced from Seneca Lake, located in New York State’s well-regarded (especially for Riesling) Finger Lakes region known for more delicate interpretations of the grape. The regionally-typical lighter (to medium) body has lovely notes of sharp tropical fruits, blooming white flowers, creamy lemon and grapefruit pith alongside the characteristic slate minerals and just a subtle note of petrol; varietaly-correct while remaining subtle enough to avoid offending his more mainstream clientele. Sufficient acidity on the palate brightens the fruit and the mineral notes provide sufficient sophistication to intrigue the more discerning aficionados. A great first effort. Drink now (make sure to let the wine warm up a little in the glass, otherwise you won’t get the lovely fruit on the nose).

Goblet, Cabernet Sauvignon, Chalk Hill, 2015: Sourced from the acclaimed Chalk Hill Sonoma vineyards, this 100% Cabernet Sauvignon wine spent 24 months in French oak. Well made with rich black fruit on both the nose and palate accompanied by spicy oak, chocolate and tobacco notes, along with mocha on a backbone of robust tannins that are still integrating, good acidity and rich minerals. The sweet fruit is well balanced by slightly smoky oak, subtle notes of earth and a hint of floral. Drink now through 2021.

Goblet, Pinot Noir, Mendocino, 2015: Loaded with deep, rich and extracted red fruits including plums and sweet cherries on both the nose and medium-bodied palate, the wine has lovely spicy notes from the 12 months it spent in older oak barrels. Clocking in at 14.5% AbV it’s slightly less balanced than I would have liked but the wine is well made with earthy notes, violet and lavender bring nuanced complexity and sufficient varietal typicity, despite being very new world and ripe. Rich and elegant with a lingering finish of predominately fruit, it will appeal to many while disappointing anyone looking for anything akin to Burgundy. Drink now through 2019.

Goblet, Petite Sirah, Sonoma, 2015: The label on this wine mistakenly indicated a 2014 vintage but it is actually the 2015 vintage. Sweet black and blue notes of blackberry, plums, blueberries, tar, lead pencil and more sweet fruit on both the nose and medium to full bodied palate are accompanied by rich violet, savory iodine and some roasted meat. Clocking in at 14.5% AbV, the wine is well made, round and mouth-filling with oodles of rich fruit, sweet oak and some savory herbal nuances that pleases. Drink now through 2021.

Goblet, Syrah, Mendocino, 2014: A rich and deep Syrah with loads of dark forest fruit and crushed berries with savory tannins, roasted meat, cracked black pepper, warm spices and an subtle undertone of menthol and sun-kissed Mediterranean herbs on the medium-bodied palate. Layers of nuanced flavors open slowly as the wine gets air and time in your glass. Very enjoyable with some chocolate on a backbone of lush savory tannins that are still integrating. Drink now through 2020, maybe longer.