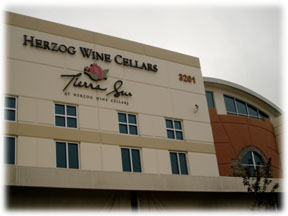 This week I wanted to discuss the Herzog Winery. Owned by the Herzog family (which also owns Royal Wine Corporation); I was astounded to realize last week that, while I often write about the wines imported or produced by Royal Wine Corporation and have selectively noted a number of their gems, I have never discussed the actual winery on these pages. Given the breadth of their portfolio, the quality of the wines and the winery’s importance in the development of the kosher wine industry (outside of Israel); I felt they had earned an edition all to themselves.

The winery is named for the Herzog family, who has been involved in winemaking for eight generations dating all the way back to the 19th century. Their acclaimed über-tier wine from the famed To-Kalon vineyard reviewed below is named Generation VIII to commemorate this aspect of the family’s rich wine-making history. The patriarch of the family, Philip Herzog, was making wine in Slovakia for Emperor Franz-Josef who, according to tradition, was so enamored with his wines that he bestowed upon him the title of Baron in appreciation of his wine-making skills. After avoiding the Nazi’s during World War II, the Baron’s grandson Eugene arrived in New York in 1948, finding a job with a small kosher winery on the lower East Side of Manhattan to support himself and his family. There he was paid in equity which eventually allowed him to take over the winery which was floundering. In honor of their grandfather the Baron, they renamed the winery the Royal Wine Company and set about revitalizing it. As part of this process, they also relocated to the West Coast in the mid-eighties in order to be closer to the best vineyards and to obtain a higher level of control of the entire process.

The winery is located in Oxnard and also houses what it rumored to be the best kosher restaurant in the United States – Tierra Sur. I have not yet visited but am making every attempt to do so as soon as possible as the lethal combination of amazing wines and incredible food paired together is simply too much for me to resist for much longer.

Needless to say, while the Herzog Winery continues to produce buckets of sweet Kiddush wine under the Kedem label, it is the rich, complex and ageable treats produced under their Special Reserve line and the affordable table wines under the Baron Herzog label by chief winemaker Joe Hurliman, that are of interest to any self-respecting oenophile. The Special Reserve wines include the Chalk Hill wines; the well-known varietals from the Napa, Alexander and Russian River valleys as well as some recently introduced single vineyard “special” wines from premium California vineyards. These include the aforementioned To-Kalon wine, one from Haystack Peak and a premium Chalk Hill wine named Clone #6 (all are reviewed below).

While I am not a major consumer of the wines produced in the Baron Herzog line and find the unfortunately very popular Jeunesse almost on par with the bottle that shall not be named; their Baron Herzog Zinfandel is an extremely good budget wine consistently earning a YH Best Buy rating (in general, kosher California Zinfandel is a good bet). Generally though, I find the best bargains for table wines to be found among the Israeli wineries. That said and depending on my mood, I do enjoy the Baron Herzog late-harvest Chenin Blanc and Chardonnay wines from time to time. As with other large wineries, it is far beyond the scope of this newsletter to review all of their wines and I have focused on a number of the Special Reserve wines enjoyed recently.

Have a great week,
Yossie

Herzog, Generation VIII, To Kalon, Cabernet Sauvignon, 2006: One of Herzog’s flagship wines and an example of the winery’s relatively new focus on single-vineyard, terrior-focused, wines. When I last tasted the wines (in February at Royal’s annual awesome wine extravaganza); I thought it was still a little young and needed some time in the bottle to be fully appreciated. I recently had an opportunity to retaste this wine (thank you again WH) and, given that I purchased a few bottles for Zevi’s Bar-Mitzvah, was happy to find it evolving nicely with its powerful yet elegant structure intact. With robust tannins that are starting to find their rightful place among the wood and generous fruit and an intense nose; this wine is clearly intended for greatness and solid aging. After an hour or so in the glass the evolving layers of black and red fruits, vanilla, cassis and toasty oak start producing their beautiful and harmonious music, providing a delicious wine to be revered and enjoyed, sip by expensive sip. A velvety and opulent finish of dark chocolate tinged with spiciness rounds out this iron fist in a velvet glove of a wine. Though exceedingly expensive and not a bargain by any means, I recommend picking up a couple bottles even if only because, according to the rumor mill, it is doubtful there will be another To Kalon wine as the grapes are simply too expensive and this might go down in history as the first “kosher cult Cabernet” (to quote the Wine Spectator).

Herzog, Chalk Hill, Clone #6 Edition, Cabernet Sauvignon, 2007: While I think the “Chalk Hill” wines are great, I rarely drink them given their high prices, believing there are significantly better values available. Like its other Chalk Hill brethren, I found this one to be a complex, layered and delightful wine. Great structure with the tannins and wood living harmoniously with the blackberries, raspberries, hints of anise and cracked black pepper. A deep, concentrated wine that should age nicely and continue to improve with age (although it is eminently drinkable now – it is not quite yet ready). A long, delightful finish redolent of espresso and dark chocolate tinged with anise and mint rounds out this treat that will continue to age for quite some years.

Herzog, Haystack Peak Vineyard, Cabernet Sauvignon, 2007: The last of the three musketeers among the current single vineyard collection and my favorite of the three. Not as intense as the To-Kalon or mysterious as the Clone 6, but somewhere in between while still maintaining plenty of both. A rich and full bodied wine with plums, cherries and blackberries which are matched with cigar leaf, pencil shavings and bittersweet chocolate. An ever-so-slightly minty finish that goes on for quite some time completes this wine. A wine to be enjoyed with like-minded folks.

Herzog, Special Reserve, Alexander Valley, Cabernet Sauvignon, 2007: I have never visited the Alexander Valley (nor the West Coast at all) but, if this wine is any indication, it must be a pretty nice place. Robust tannins that still need some time to settle down will ensure this wine continues to improve and mature over the next couple of years. Plenty of black cherries, raspberries and anise mingled with some cloves and other warm spices make this a warm, rich and complex wine. That said, it’s still a little early to pop the cork on this one. I look forward to retasting this wine in six months and will continue to enjoy the 2005 and 2006 vintages that remain in my cellar in the interim.

Herzog, Special Reserve, Cabernet Sauvignon/Zinfandel/Syrah, 2006: I last tried this wine from the 2002 vintage and was won over by its pure deliciousness. A great blend in which Joe Hurliman manages to coax out the absolute best characteristics of each varietal and one that the sum is far greater than it parts. Were it not for the high price tag, given its obvious edge in complexity and ageability, it would easily replace the Recanati Petit-Sirah/Zinfandel as my blend with which to introduce new wine drinkers to the wonderful world of wine. The combination of good acidity and balancing fruits make it pretty food-friendly and the wood and tannins combine to make this a real wine with the ability for some nice aging and evolving complexity.

Herzog, Special Reserve, Lodi, Zinfandel, 2006: A great example of American Zinfandel – I love this wine! A full-bodied, delicious treat with an abundance of wood that is well integrated with the juicy plums, black cherries and blackberries. Great structure bodes well for long-term cellaring and hints of spices tinged with freshness culminate is a long, velvety finish.

Herzog, Special Reserve, Russian River Valley, Chardonnay, 2007: While the Herzog’s have accumulated quite an impressive stable of red wines, the same cannot be said with respect to their whites which are primarily found in the lower tiered Baron Herzog line. The Russian River Chardonnay (and some of their late-harvest offerings) is an exception to that rule presenting us with a rich chardonnay that avoids being a California buttery oak bomb with some cool spiciness along with grapefruit, green apple, Meyer lemon and some peaches.