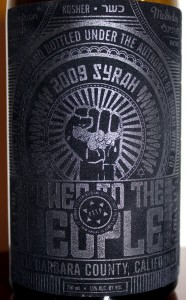 A grape native to France’s Rhône Valley, I believe this varietal has great potential to be among those most appropriate to showcase Israel’s unique terroir (in my opinion, Grenache and Cabernet Franc also top that list of potentials). However, as Syrah continues to make inroads within the Israeli market, sales of California Syrah in the United States have crashed and burned, dashing the hopes of many for the varietal to become the US’s next big thing. While I am not yet ready to write off Californian Syrah, especially given the incredible kosher ones gifted to us by micro producers like Shirah Wine and Brobdignanian, I would posit that the downfall being discussed by many in the wine industry is somewhat attributable to the consumer’s shift away from “Parkerized’ wines (i.e. big, oaky fruit bombs) to more elegant, subtle and savory wines (i.e. leaner wines with higher acid and more earth, leather, graphite, minerals and herbs). This shift is not particular to the noble Syrah varietal, Merlot, Cabernet Sauvignon and Chardonnay have also been affected in the same manner.

Another possible reason for consumers’ lack of interest in Syrah is confusion. As you already know, Syrah is also referred to as Shiraz (they are not variations of the same grape – they are exactly the same grape). The grape is widely planted around the world, perhaps most prominently in its indigenous Rhône Valley in France and Australia, but also in California, South Africa and Israel as well as many other countries around the world. The wines of the Rhône valley are split between the more expensive, straight varietal Syrah wines from the Northern Rhône (where only Syrah can be planted) which is a bit cooler, and the typical Syrah, Grenache and Mourvèdre blends from the Southern Rhône which are typical cheaper (excluding wines of the famed Châteauneuf-du-Pape region), more approachable and “riper” due to the slightly warmer climate.

As a general rule, the varietal is known as Syrah in the Rhône Valley and Shiraz in Australia, but the choice of name in most other countries, including Israel, is somewhat less regimented. In many instances the name is derived from the vine clone used – wines grown from Australian clones are typically labeled “Shiraz” and wines produced from Rhône-based clones will be labeled “Syrah”, with both clones utilized in Israeli vineyards.

Adding to the confusion is another determining factor in the name application – style. Winemakers tend to use Syrah for Rhône-like red wines – where grace, elegance, smoke, minerals, grilled meat and floral notes tend to dominate; and Shiraz for typical Australian-like wines – big, bold, fruity and spicier with higher alcohol and plenty of pepper, leaving a slightly sweet (jammy) impression. Notwithstanding the above, unlike other aspects of wine labeling that are strictly and uniformly applied, the use of Syrah versus Shiraz is relatively arbitrary and each winemaker/winery uses it differently. The type of wood barrels used and the length of time spent in them heavily contribute to the characteristics of the particular wine as well further muddying the waters. With so many different types of Syrah being produced, the consumer has no clear path to determine what type of wine will be in the bottle of Syrah/Shiraz he is purchasing, leaving him to go with grape varietals that are at least slightly more conforming like Cabernet Sauvignon, Chardonnay and even Moscato (which seems to be undergoing a revival, at least somewhat due to Hip Hop but more on that at a later date). As an aside, the split between these two types of wine showcases Eric Asimov’s recent hypothesis that most wines can be categorized for the consumer as savory or sweet.

Given the prominence of Syrah from the Rhône Valley and Shiraz from Australia, it’s unfortunate that no great kosher versions exist from either country (there are plenty of offerings, some drinkable, mostly drek but definitely nothing great). Happily Israel and California have worked hard to provide us with some delicious versions of the grape, many of which are reviewed below. As you will note from the various Shiraz and Syrah wines listed below, many of the Israeli versions seem to be a good mixture of Syrah and Shiraz styles, taking the good from both and creating big juicy wines that are somewhat restrained with plenty of elegance and spice. I hope you enjoy them as much as I do.

Karmei Yosef (Bravdo), Shiraz, 2009: Given my admiration for this winery, I was delighted when their wines were finally imported into the United States and they introduced a delightful blend called “Coupage”. As with the 2007 vintage I previously reviewed, this is a full bodied wine with distinct Shiraz personality and a hint of the Mediterranean terroir of its birthplace. A big, intense and brambly wine, consistent with its Shiraz name, with muscular tannins and ample, slightly spicy, wood matched nicely by blackberries, cassis and juicy plums on both the nose and palate, together with Mediterranean herbs and hints of cigar-box cedar. A great wine right now, but give this one another year or so in the bottle and you will be rewarded by a smoother and more grown up wine. A definite keeper and happily decently priced (unlike many other recent boutiquey arrivals on our shores).

Binyamina, Reserve, Shiraz, 2007: A wine that is easy to drink right out of the bottle with a medium body and soft tannins beautifully integrated with blackberries, black cherries and some cassis along with some leather and hints of smoked meat. A medium finish with more fruit and leather rounds out this smooth and mouth filling wine.

Carmel, Shiraz, Single Vineyard, Kayoumi, 2006: As I have written in the past, Carmel really struck gold with this vineyard which has consistently provided them with rich and complex Cabernet Sauvignon and Shiraz wines. A deep and intense wine with plenty of black fruit, spicy oak and notes of lead pencil accompanied by mouth coating tannins that are so well integrated they are almost unnoticeable until the wine is gone. A nice long finish with more black fruit, tobacco and a hint of chocolate rounds out this delightful wine that will continue to develop for another few years.

Dalton, Shiraz, Estate, 2009: Dalton is one of the Israeli wineries that produce both a Syrah (in its Reserve line) and this Shiraz, showcasing the winemaker’s abilities to coax different characteristics out of the same varietal with great success. A medium bodied wine with smooth and well integrated tannins providing the backbone for brambly black fruit, spicy wood, hints of almonds with mid palate additions of cedar, earth and hints of smoke. A bold wine that I enjoyed more on its own than with food.

Shirah, Power to the People, Syrah, 2009: Another hit from the Weiss brothers. If it is really true that many people select their wines solely based on the label – the future is bright for them as they have the most awesome wine labels of any kosher wine. Following closely on their One Two Punch and Syraph wines, the black velvet label is simply gorgeous. Luckily for us, at least in this instance you can judge a wine by its label, as the contents are well-worthy of the awesome label. The 2% of Viognier with which this wine was blended (and fermented) shines through far more than one would expect for 2%, as initially the nose and palate were dominated by peach, apricot and guava flavors and was almost medium bodied (far from what was expected after the blockbuster Syraph). After half an hour or so, the delicious California Syrah reared its beautiful head and rewarded us with plums, cherries and a hint of ripe raspberry accompanied by plenty of smoky wood, some warm spice, dark chocolate, anise all wrapped in well integrated tannins and delivering a round, mouth filling and delicious wine with a medium cigar and chocolate finish with a minty tang. Not a typical Syrah but a great drinking experience (available directly from the winery) and a wine that should cellar comfortably for at least five years if not longer (and will continue to develop for at least a few more coming together perfectly over the years).

Ella Valley, Syrah, 2007: As I have mentioned before, I really love the wines from this great and under appreciated (thus well-priced) winery (their Cabernet Franc in particular is to die for). A wine that can be enjoyed on its own or with food although I prefer it with food. A medium to full bodied intense wine loaded with blackberries, plums, currants and raspberries on the nose with additional hints of bitter citrus peel and earthiness added on the palate. An incredible depth of flavor and nuance throughout with slightly spicy oak, asphalt and more black fruit on the mid palate, leading into a long finish of black forest fruit, graphite and more dark chocolate. While I don’t see the wine getting any better with age it will easily keep for another year or two.

Yarden, Syrah, Yonatan Vineyard, 2007: Having nothing to do with my natural affinity for a vineyard named after my oldest son, the Yonatan vineyard seems to have been blessed with the same pixie dust that targeted Carmel’s Kayoumi vineyard and is on track to overtake the Elrom vineyard as one of Israel’s best. While the Golan Heights Winery seems to have saturated itself with their single vineyard wines, it’s tough to argue with success, especially in the Syrah arena. While I have never really liked their “regular” Yarden Syrah (and still don’t), their single vineyard Syrah wines have been fantastic (I have written often about the incredible 2004 Ortal Syrah). A rich and concentrated wine with plenty of wood and extracted fruit, in the style we have come to expect from this series but with the elegance and balance of power that accompanies most of these wines as well. Generous tannins provide a solid backbone for cherries, plums, raspberries on the nose, together with kirsch liquor and a spicy bite from the oak. On the mid-palate a touch of savory notes creep in with wet forest earth and hints (forgive me) sweaty leather (in a good way – I promise). While a delicious wine and incredible drinking experience, I got the feeling of a wine that was searching for a path, finding itself locked between Syrah and Shiraz influences so I’d give this one a year or two before opening at which point it should cellar for another five years at least.