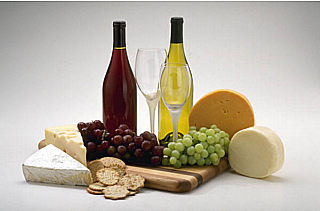 After a couple weeks hiatus from the newsletter as a result of a few hectic weeks at work followed by vacation with the kids (certainly no less hectic), this week’s newsletter deals with one of the topics about which I get asked the most – which wine goes with which food and what are some of the most perfect pairings? While more wine than one might think is consumed solo without the natural accompaniment of food, as a general matter I believe food and wine are soul mates that belong together – each bringing something to the table that enhances the other. A quick Internet search will show that there are dozens of websites and apps specially geared to finding those elusive perfect pairings and hundreds of books have been written on the topic. One wine and food pairing axiom has even been enshrined in pop culture by none other than 007 himself in the movie “from Russia with Love” where Bond indicates that not following the rule that “red with meat and white with fish” clearly marks one as a bad guy. Now, while this may not be the most incorrect wine truism out there, it certainly comes from simpler times when food was substantially more homogeneous. In our progressive age of culinary exploration and crossovers, the characteristics of the wine are far more important that its color with the huge variations among wines (Pinot Noir can be more like a white wine masquerading as a red and oaky Chardonnay can be more like a red wine gussied up like a white one).

Now, there is actually quite a bit of controversy around this subject with some schools of thought almost neurotically focusing on the massive importance of making that great match and the horrendous things that could happen to your meal and wine if you make a mistake with your pairing. Given the amount of money generated by the industry it won’t come as a surprise to you that this is the prevailing mindset among the wine professionals who are happy to assist with finding that elusive books with boatloads of material on this topic, some of which can make one feel like a degree in chemistry is required to put a good match together. On the other end of the spectrum are the folks who thing the whole thing is a load of bularky or, even if there is something to it, one should simply drink the wines they like with the food they like and be done with it. Chilean Sea Bass lightly poached in white wine sauce with the 2006 Covenant Cabernet Sauvignon? Go for it!

From my perspective, as with most wine-related items, I tend to believe that one should do with wine that which brings pleasure and enjoyment, regardless of common wisdom or the advice of professionals (other than drinking the blue-bottled abomination which should never be done under any circumstance). If the wines that bring you the most pleasure are the rich and full-bodied Cabernet Sauvignon wines or the full-bodied, oaky and buttery Chardonnays, by all means drink them with your meals and ignore the wine snob snickering. To quote Mark Oldman, the happy fact about wine and food is that, like Pizza, even when bad it can still be pretty good. That said, there is a ton of science behind food pairings (mainly relating to how different food compounds interact with those in the wines) and, as anyone who has ever experienced a really great wine pairing will tell you, a great one can be sublime and forever change a dining experience (for me it was lightly seared Foie Gras with the 2001 Piada) and may be worth the effort. In this week’s newsletter I have provided a few general tips and suggestions that can be helpful in getting folks to think about wine and food in a different way; a manner that will make it easier to create a more harmonious combination of foods and wine that will hopefully elevate your dining experience (at least occasionally) to the truly spectacular – one in which the sum is far greater than the parts.

When thinking about which wines and food go together, one of the most important things to consider are the characteristics of the wine and food in question. The weight of the wine is probably the most important aspect of wine pairing – lighter wines go with lighter food and heavier wines make better pairings with heavier dishes. In order for the concept of pairing to work best, the food and wine shouldn’t overwhelm one another. A delicate and aromatic Pinot Grigio could be obliterated by a heavy meal of beef bourguignon that might more appropriately be matched to a bold Shiraz. The importance of weight in food and wine pairing is the genesis of the white with fish and red with meat rule, but given the dizzying array of ‘weight’ among both fish (tuna and salmon are pretty heavy) and meats (chicken and veal can both be pretty light), one comes to realize how much more there is to wine pairings than such a simplistic cliché.

Another important concept of matching is whether the goal is to achieve a match or a contrast. As an example, a match can be achieved by pairing flavors in the dish with an dominant flavor in the wine (spicy pepper sauce on the steak with the spicy streak in a Zinfandel or the butteryness of an oaky Chardonnay with a fish poached in a sauce heavy on the butter) or by going for a contrast of textures like the crisp acid of a Sauvignon Blanc with the heavy grease of fried foods like potato latkes (or potato chips). Other examples may include a fruity wine with a dish that has a fruit component to it or a wine with some pungent earthiness to it matched to a mushroom dish.

A few components in any wine play a huge part is making good matches – acid, alcohol level, tannin and the sugar levels. Acid in a wine acts like salt on food – it highlights the flavors in the food bringing them into the forefront. As long as the wine is balanced, the more acidity in the wine, the better it will pair with food. Its crispness can also act as a counter balance to fatty foods. Typical high-acid wines include Barbera, Sangiovese and Sauvignon Blanc (most of Four Gates’ wines are pretty acidic, one of the main contributors to their great compatibility with food). High alcohol can overwhelm delicate flavors in a dish creating an unpleasant and slightly bitter sensation but matches nicely with sweet foods (think how most sweet dessert wines are high in alcohol). Tannin, which plays such an important part in the structure, balance and aging ability of those big wines we love, is softened when matched with fatty foods, high in protein like steak or cheese but diminishes sweetness in foods, making them seem dry and bitter which is why drinking a big Cabernet with rich chocolate cake doesn’t result in such a great sensation.

When the thought of coming up with a pairing is overwhelming, there are some food friendly wines that are pretty fail-safe including my personal favorite – Champagne, which pretty much goes with everything with its acidity, refreshing bubbly and relatively low alcohol, crisp dry Rose, Sauvignon Blanc, Pinot Noir, Sangiovese, Riesling (together with top notch Burgundy, one of the biggest holes in the kosher wine world’s repertoire) and Cabernet Franc. On the flip side, when in doubt avoid trophy or big wines like Cabernet Sauvignon (tannin is probably foods biggest enemy, making it taste bland and dry) and Chardonnay (ironically, the two best selling varietals of kosher wine (other than Moscato and semi sweet)). One last tip is that the sauce in a dish can play a far bigger role than the relevant protein or other base component so when pairing wine with a sauced dish, focus on the sauce components which will play a big role in the pairing.

As I mentioned, a future newsletter will deal with specific pairings including cheese, salads, spicy foods, sushi, chocolate and desserts so stay tuned (but a tip for desserts is that the wine needs to be sweeter than the dessert in question). Despite all these tips, remember what you like is most important both in a wine and in any pairing. Sauternes with Foie Gras may be a classic combination but if you don’t like Sauternes (or Foie Gras for that matter); the magic of the pairing is irrelevant. As Red responded to James Bond’s snobbish comment regarding the killer’s choice of fish with Chianti (“the red kind”) in that classic scene in “From Russia with Love”: “you may know your wines but you’re the one on your knees…”