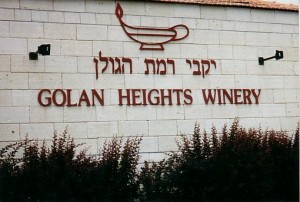 One of the things I enjoy most about writing this newsletter is introducing folks to newer and less known wineries, usually Israeli one. While the proliferation of new boutique kosher wineries is an awesome relatively recent development that enables us to experience a huge spread of wines, wine-making techniques, expressions of terrior and types of wines from around the world; a less fortunate by-product is that we tend to start regarding the larger, more “commercial” wineries (such as Barkan and Carmel) as passé and less interesting or exciting to experience. As I have mentioned in the past when discussing these wineries, this is a crying shame since, just because you have become a behemoth doesn’t mean you can no longer produce quality or even special wines. We are experiencing a true golden age of kosher wines with more and more producers realizing that they need to keep pushing the envelope, both with respect to quality and individuality, in order to win our hard earned Lirot.

With that in mind, this week I wanted to talk about the 800-pound gorilla in the room – the Golan Heights Winery (“GHW”) which is the third-largest commercial winery in Israel producing over 30 different wines on a more-or-less annual basis. Regardless of my adoration for the soul of the Yatir and Ella Valley wineries and the superlative-laden portfolio of wines Carmel is putting forth on a regular basis, GHW remains, in my opinion, the gold standard for Israeli wineries. Historically the winery started the revolution in the kosher wine world resulting in the fact that Manischewitz is no longer the first thing that comes to (wine knowledgeable) folks when they hear the words kosher wine (although from the idiotic way almost every kosher wine-related article I read begins you wouldn’t know that). Their Cabernet Sauvignon from the Yarden series dating all the way back to the early 90s are still drinking very well today, and that wine remains the most consistently good and reasonably priced Israeli wine on the market today if you are looking for a wine with any serious cellaring capability. Buying an annual case of the Yarden Cabernet Sauvignon and drinking a bottle a year provides one with the true oenophilic pleasure of watching something develop and mature (kind of like kids without the diapers, sleepless nights and exorbitant tuition).

Until recently GHW produced wines under three labels – Yarden, Gamla and Golan. In 1990, which was a fantastic vintage year, GHW introduced their flagship wine – the Katzrin and indicated it would produce only in exceptional vintages. Subsequently that produced a Katzrin in each of the 1993, 1996, 2000, 2003, 2004 vintage years (all of which are great and long-lasting – the 1993 is still at its peak) and they should be a 2007 vintage Katzrin as well (GHW also produces a Katzrin Chardonnay almost annually). In 2001 GHW introduced another ultra-premium, single vineyard wine of which there was a Cabernet Sauvignon from the El-Rom vineyard and a Merlot from the Ortal vineyard (both which were unbelievable, reviewed multiple times on these pages and a welcome addition to the top-tier kosher wine family). These wines were produced again in 2003 (see newsletter #47) and then again in 2004 leading some to start doubting the “only in great vintages / something special” concept.

While it is true that GHW is currently producing a large number of single-vineyard wines (many more to come over the next couple years) and they appear to be released on a near-annual basis (as opposed to the one in a special vintage year Katzrin-style wine), this in no way shape or form detracts from the fact that GHW has, once again, stepped up to the plate and hit one out of the park as these are all top-notch wines. My one complaint is price-related and not specific to GHW. A future newsletter will touch on recent pricing concerns for the better kosher wines and whether the market can sustain some of these pricing issues over the long-term.

Any winery would be forgiven if they decided to take a breather, rest on their laurels and ride their recent successes but this was not the path GHW took. They recently released yet another flagship wine which is a blend called “Rom” from the 2006 vintage. A limited amount of 6000 bottles was produced at they are being sold for approximately $85 in Israel and $130 in the US. I have purchased a few mainly because 2006 is Zevi’s birth year and, from Daniel Rogov’s note, it seems like it will still be very much alive and kicking at his Bar-Mitzvah. Additional, Rogov gave the wine 96 points making it the highest-scoring Israeli wine yet which will of course lead to a stampede on the wine and the ability of folks to charge ridiculous sums of money for it. [I subsequently tasted this wine – see my notes here].

All that said, there is one area in which other wineries (like Galil Mountain, Hagafen and Recanati come to mind) surpass GHW. While most of their wines are good to excellent, they are not stinker-free – as there are some offerings in their Golan series (especially the Sion Creek stuff) that isn’t quite up to par with the rest of their portfolio.

While this email can in no way come close to describing the huge number of wines produced by the winery, I have described a number of wines from different series below that I think are worthy of your attention and that I have not reviewed in the recent past.

Golan Heights Winery, Gamla, Brut, n.v.: For years GHW produced a vintage Blanc de Blanc and Brut under the Yarden label but for almost a decade now only the Blanc de Blanc has been produced under that label and they have produced a Brut under the Gamla label (which is currently in some turmoil – stay tuned for further details). As you can see from the note below, they currently have both a non-vintage (made from combining grapes from several vintages – a common practice for sparkling wines) and a vintage wine reviewed below. This one a blend of 50% Pinot Noir and 50% Chardonnay with great acidity and bubbles coupled with green apples, toasted white bread and lime. A great food matcher and good with almost anything.

Golan Heights Winery, Gamla, Brut, 2007: More complex than its non-vintage sibling reviewed above, this wine has the traditional green apple and yeasty notes you would expect from a Champagne together with sharp bubbles that hang on for as long as you can resist sipping this delightful treat which is somehow lighter and fresher than the Yarden Blanc de Blanc but just as crisply dry.

Golan Heights Winery, Gamla, Nebbiolo, 2006: Another example of GHW being trend-setters and not afraid to experiment with new varietals. In this case the Nebbiolo grape which is a red Italian grape predominately associated with the Piedmont region where it is the primary component in Barolo and other wines. Loads of cherries and other black fruits together with hints of licorice and earthy notes but also with tannins that are still struggling to find their way among the oak and fruits. While tasty and approachable now, I would suggest giving this one at least another 12 months before opening. To the best of my knowledge, this wine is only available at the winery in limited quantities but I also have heard that it is served if some restaurants

Golan Heights Winery, Yarden, Gewurztraminer, 2009: In my opinion both the variety itself and definitely GHW’s version of it are among the most under appreciated wines out there. Simply delicious and quirky as well as a fine match to many difficult food-pairings; this Gewürztraminer attains almost perfect harmony among its fruits, flowers and bracing acidity. Loaded with notes of freshly bloomed spring flowers, lychees, and tropical fruit with a long finish this is a great summer wine that should be a year-round staple of your wine-drinking repertoire.

Golan Heights Winery, Yarden, Syrah, 2005: Looking back over my notes from the last couple years I realized that I had never written about two wines that were “groundbreaking” back in the day – their Syrah (not to be confused with the single-vineyard version we all know and love but that is a relative newcomer to the scene) and their Pinot Noir reviewed below. I was initially not a fan of their Syrah but over the years they adapted and seemed to have gotten things just right with this one (obviously the 2004 Ortal Syrah was great as well). An elegant wine that can easily be described as an iron fist hiding behind a velvet glove given its muscular tannins, spicy wood and nice hints of smoke. Nice blackberries, raspberries, dark chocolate and espresso backed up by more spice and a long, mouth-filling finish; make this wine quite a treat.

Golan Heights Winery, Yarden, Pinot Noir, 2005: Given their global positioning and abundance of sun, many Israeli wines are fruit bombs loaded with oak (even when well crafted and delicious) with Castel being a winery that stands out for its adherence to subdued elegance over blockbusterish fruit. Pinot Noir is a grape that requires careful cultivating and care in order to coax out its full bag of charms. While GHW’s version doesn’t seem to me to be a true representation of the genre it is a delicious and interesting wine nonetheless. A heavy wine that sits in the middle of your palate and demands attention. Redolent of grilled meat along with the more traditional berries and smoke lead into an incredibly long and fulfilling finish, this wine is a blockbuster – an “Israeli” Pinot if you would.