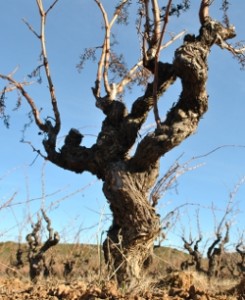 As I have often mentioned, while most wines are meant to be consumed early and don’t benefit from any additional time in the bottle, a few years of cellaring can make magic happen for a small percentage of quality wines (usually the most exciting ones).  The additional time in the bottle gives the tannins, acid, fruit and flavors time to come together in the harmonious music the wine maker intended.  However, this week I wanted to focus on another oenophilic area in which age can play a paramount role and be a big factor in the quality, flavor and perhaps most relevant, intensity, of the wine – the vines.  Wine growers around the world have nothing but praise, adoration and love for their “old vines”, sometimes talking about them in language usually reserved for ones children.  While not all growers (or wine drinkers) agree that the age of the vine makes a difference, most people feel that there is something special in a wine made from old vines.

First, what exactly constitutes an “old vine”?  While there is no hard and fast rule governing this distinction, nor is its use on wine labeling heavily regulated, a lot depends on where in the world you are.  For places like France, Spain or Argentina with many vines between 50-100 years of age, an old vine needs to be at least 50 years old.  On the other hand, in relatively new wine growing regions like New Zealand, Oregon or Israel, a 25-30 year old vine is pretty darn old and already worthy of the title.

As a vine ages, at around the 20-year mark it starts to undergo a number of changes which directly effect the quality of grapes it produces.  These changes include deeper and stronger roots, enabling the vine to benefit from a more diverse range of nutrients and minerals.  In a rainy harvest season the deeper roots protect vines from excessive water which can lead to bloated grapes with a substantially reduced concentration of flavor, and in a dry season, the roots help the vines find the necessary moisture that might only exist deep below the surface.  As the vine ages it starts to suffer from reduced circulation as well.  This results in fewer nutrients being available, leading to a reduction in yield (usually between 1-3 tons per acre).  As the vine now needs to service a smaller number of grapes, they benefit from increased concentration and flavor and provide for more nuance and complexity (although the added complexity tends to be more prominent as the wine in question ages and the bright fruit recedes into the background).

As with maturing adults, another benefit of old vines is their stability.  While the wines produced from younger vines can change from harvest to harvest depending on the weather, with substantial shifts in the levels of sugar, acid and other phenolic compounds, old vines are much steadier from year to year and rarely produce unbalanced grapes.  A grower may also have the ability to harvest a little earlier if necessary, as old-vine grapes often ripen earlier.  While these attributes are less important in a warm growing climate like Israel, they can make or break a harvest in colder regions like France and are much appreciated by the growers.

Listed below are a number of old-vine wines currently on the market, all of which are worth seeking out.  Included in the list are two wines (the Cave and Recanati Carignan) available only in Israel and in limited quantities, but very special wines, worth taking the time to seek out and bringing back a few bottles.

Binyamina, The Cave, Old Vine Cabernet Sauvignon, 2007:  I was never a big fan of Binyamina’s boutique Cave wines, finding them underwhelming and overpriced.  This changed with the 2006 vintage that I loved and included it in my Pessach Shopping List.  The party continues with this 2007 Single Version Old Vine version produced as a very limited edition (1,200 bottles) from the famed Kerem Ben-Zimra vineyard.  I purchased a number of bottles based on Daniel Rogov’s recommendation and finally got a chance to taste one over the weekend – it was spectacular.  A rich nose and palate of blackberries, plums and black cherries along with earthy notes of forest and cloves.  Nice notes of sweet oak, tar, acid combine with well integrated yet powerful tannins for a deep, complex and rich wine with a long and caressing finish.  I probably opened this wine a little too early which, while eminently enjoyable now, will continue to improve in the bottle for another for a few years and cellar comfortably for ten years or so.

Recanati, Carignan, Reserve, Kerem Ba’al, 2009:  Given the success Carmel has had with its Old Vine Carignan (tasting note below), it was only a matter of time before another awesome expression of the varietal founds its way to the market.  In addition to being over 30 years old, these are true bush vines from the Judean Hills, that have flourished since their planting without irrigation, pruning, support (known as the “goblet” system) or other methods of human meddling (Ba’al is loosely Hebrew for wild).  As would be expected, these are low-yield vines of less than two tons per acre.  A wine that gracefully straddles power and elegance.  Muscular tannins that needed half an hour to an hour to soften up in my glass and allow the fruit and spice to shine through but very much in balance with the fruit.  Plenty of blackberries, currents and other black forest fruit along with warm spices, chocolate, espresso, white pepper and anise on both the nose and palate, with a good jolt of balancing acidity leading into a medium finish that lingers nicely.  The fruit is on the restrained side and elegant, which is consistent with Recanati’s recent direction away from fruit forward wines towards retrained Mediterranean elegance.  Very different and delicious, this wine is another candidate for some serious cellaring.  Another limited edition wine with about 5,900 bottles produced.

Capçanes, La Flor de Flor, 2007:  As the Peraj Ha’abib from Capcanes has long been my one of my favorite wines, I was very excited when they released this 100% Garnacha wine, with grapes from vines that are between 85-105 years old.  The wine manages to be full-bodied, elegant and feminine in one fell swoop, while remaining rich, deep and concentrated.  Well integrated, near-sweet tannins provide a solid backbone for layers of black cherries, plums, violets and other flowers, spices and some dark chocolate, with hints of smoky oak and flinty minerals.  A long finish rounds out this wine that will probably be at its best in a year or so and cellar for up to another eight years after that.

Carmel, Appellation, Carignan, 2007:  The Carignan grape was probably a significant contributor to Carmel’s prior horrific reputation for terrible wines given that it was a major component in cheaper and unappealing wines.  This wine really puts the much maligned grape in a whole new (favorable) light.  Using grapes from 40 year old vines and blended with some Petit Verdot for good measure, this wine has great fruit and is slightly spicy with hints of espresso and a nice finish.  Not many folks do well by this grape but Carmel certainly does.

Carmel, Appellation, Petite Sirah, 2007:  The 2006 vintage of this wine won Decanter’s wine of the month last year and the 2007 is up to the challenge posited by its younger brother.  While “old vine” means different things in different countries, these Petite Sirah vines are over 30 years old and produce a concentrated and full-bodied wine.  The raspberries, blackberries, cassis and plums on both the nose and palate combine with warm spices, Mediterranean herbs and a tobacco leaf overlay, making for a delightful wine indeed.  Another YH Best Buy.

Carmel Vintage, Fortified Petite Sirah, 2007:  Made from 100% old vine Petite Sirah grapes and fortified with additional alcohol, this is a delicious dessert wine but one whose time has come so drink up any you have lying around.  Aromas of raisins, plums, chocolate and spices are followed by mocha, coffee, sweet (and slightly tangy) jammy berries on the palate, with enough acidity and pleasant spiciness to balance the sweetness from becoming overpowering and flabby on the palate.  Hints of slightly bitter almonds do a good job of keeping the sweetness honest and the entire wine in good balance.  As opposed to the Porto Cordovero wine, I often enjoy this wine with food, as it pairs nicely with most sweet desserts.