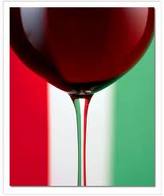 One of the recent trends of the kosher wine world has been the massive increases in quality across the board. From the table-wines produced by the major Israeli wineries to the boutique offerings made by various garagistes, more and more quality kosher wine is being produced these days from around the world (discussed in some detail in my “Trending Upwards” newsletter). In addition to fine offerings from Israel, France and California which have been around for a while, this increased quality has allowed the kosher wine lover to avail himself of good kosher wines from around the world including French Sauternes, New Zealand Sauvignon Blanc, Argentinean Malbec, Old Vine Grenache from Spain and many others. At the same time, there is plenty of room for growth in this area as we are not yet blessed with quality offerings from Alsace (although some recent offerings from Willm show promise), Austria or Burgundy to name just a few.

Until recently, Italian wines would have topped this list of regions for the kosher wine world to conquer. Despite Italy’s long & rich Jewish past and the fact that Italy is among the world leaders in wine consumption and production; historically very little notable kosher Italian wines were available. Thankfully recent years have shown an improvement in the quality, variety and sophistication of Italian kosher wines. While most available kosher Italian wines are still quaffers (albeit pleasant ones), they are much better than they used to be and continue to show marked improvement year after year which bodes well for the future. Over the last few weeks I tasted a number of the kosher Italian wines available from various producers with two notable exceptions. Two Italian producers – Falesco and Feudi di san Gregorio – produce kosher wines that I did not have an opportunity to taste but I have heard are quite good and among the best (and most expensive) kosher Italy has to offer.

Before we get into the specifics of the wines I tasted, a few words on Italy and wine in general. Wine is an extremely integral part of Italian life, even more so than with the French, a concept evidenced by the proliferation of grapevines throughout the country which grow literally everywhere. To quote Karen MacNeil “they are Italy’s version of the American lawn”. This love of wine goes back centuries with the ancient Greeks naming Italy Oenotria, meaning the “land of wine”. The varietal output from the almost 1,000,000 registered vineyards in Italy is mind-numbing and insanely humbling to any oenophile, professional or otherwise; as mastering Italy’s wine is a given impossibility. Adding to the confusion is, while New World countries like the US and Australia tend to label their wines by varietal (i.e. Shiraz, Merlot, etc.) and Old World countries like France tend to label their wines by region (i.e. Sauternes, Burgundy, etc.), Italian wines area an incomprehensible mix of both (i.e. Barolo is a place while Barbera is a varietal).

While the majority of Italian wines are simple quaffers, made for easy drinking with Italian cuisine, Italy also produces a number of complex and rich world famous wines including Barolo, Barbaresco, Super Tuscans (see below) and Brunello di Montalcino, in addition to top-notch versions of Chianti and Moscato d’Asti. Some of the most exciting wines come from one of three major wine growing regions (out of Italy’s total 20 regions) – Piedmont, Tuscany and Tre Venezie (three northeastern regions – Friuli-Venezia Giulia, Trentino-Alto Adige and the Veneto).

As with France, Italy has a complex appellation system for categorizing wines that includes two tiers – an upper tier for region specific wines and a lower tier for table wines. The upper tier regions are split into two categories – the DOC (covering ~300 areas) and DOCG (covering ~20). To receive the DOC or DOCG appellation, the wines must conform to certain requirements including with respect to alcohol levels, percentage of varietals used, vineyard yield and others. The even stricter DOCG (enacted in the late 80s) included taste and other tasting of the wines to ensure conformity with the rules. Many aspiring winemakers felt these regulations stifled creativity and limited experimentation as they were based on traditional Italian methods of wine making that were slow to evolve. During the 1970s, many Italian wine makers revolted against these regulations and created new brands of wine that didn’t conform to the DCO regulations and were forced to carry the label of lowly table wines. However, as a result of including non-Italian grapes (such as Cabernet Sauvignon and Merlot) in their blends and French oak barrels, the resulting wines were spectacularly rich and complex resulting in increasing popularity and them taking on the nom de guerre Super Tuscans, a name they carry to this day.

Given the uncommonly vast number of microclimates spread throughout Italy, it’s tough to label Italian wines with any specific flavor or textural profile – wines grown two rows apart from each other in the same vineyard may end up tasting vastly different despite a similar winemaking process and techniques. These microclimates are a result of Italy’s zany topography of mountains, hills and valleys, all juxtaposed without any seeming rhyme or rhythm. This rapid change from hill to mountain to valley, combined with its proximity to four major bodies of water (the Mediterranean, Adriatic, Ligurian and Tyrrhenian seas) has produced a crazy jumble of environments – all of which produce wine! That said, most of the wines I tasted were medium bodied and crying out for food with soft tannins, hints of earth and high acid. These wines were very different from the internationalized version of wines we have become accustomed to in the kosher wine world. When drinking these wines one must not make mental comparisons in depth, complexity and richness to those tannic Cabernet Sauvignons we are used to drinking that are loaded with fruit and wood (even if well balanced), but rather enjoy them in their own category and see if they bring you pleasure – I think they will. I note that almost all the wines I tried needed some substantial air to be appropriately appreciated which, while surprising for a lower priced and quaffer wine, isn’t the end of the world and most reviewed below were worth the effort.

From a food pairing perspective, a good rule of thumb is wines from a certain country go well with the native cuisine. For Italian wines this is especially true as many of Italy’s native grapes like Nebbiolo and Sangiovese produce tart and acidic wines that, while they can be unpleasant on their own, become softer and more interesting when matched with oil-based Italian cuisine such as marinated peppers, pasta, pizza, Insalata Caprese and other tomato-based foods, veal and cheese based dishes and the like. Heck, wine is a food staple in Italy, typically being one of the cheaper staples on any Italians shopping list (again, referring to the rustic quaffers as few Italian housewives are bringing home a $100 Brunello for their pasta dinners).

Borgo Reale, Chianti Classico, Vespertino, 2007: Initially there didn’t seem to be anything to this wine with a very closed nose and tight palate. However, after 30 minutes in the glass it opened somewhat with tart cherries, plums, cranberries and a hint of chocolate on the nose which, for the most part, followed through onto the palate along with chunky and well integrated tannins (on first sip this wine is acidic and bitter – it needs that time in your glass so give it a chance to settle down). Tasted the next day, the wine was even softer and better balanced but the fruits had faded somewhat. For the happy medium, I suggest opening this wine a few hours before you plan to serve it and pouring it 30 minutes prior (better yet, decant it and taste as it develops). Open and taste right away and you probably won’t like this wine, give it the care it needs and you will be rewarded with a well-priced and enjoyable Chianti Classico (meaning it’s from the higher-quality hilly part of Tuscany’s Chianti district).

Bartenura, Ovadia Estates, Chianti, 2009: Given my history with Bartenura’s prior mediocre offerings I was prepared to dislike this wine and was pleasantly surprised. Somewhat high alcohol (14.5%) for a medium bodied and easy going wine, but the alcohol wasn’t offensive for me. Slightly richer out of the bottle than many of the other Chianti wines I tried, with soft and well-integrated tannins (perhaps due to the 20% blend of grapes added to the typical Sangiovese). A slightly candy nose with some fruit, though not much. Will go nicely with pizza or spaghetti in addition to many other foods. In short – a nice quaffer.

Terra di Seta, Pellegrini della Seta, Chianti Classico, 2008: Terra di Seta is the only kosher winery in Italy, using organic grapes and currently producing this Chianti and a Toscana wine. Made from 95% Sangiovese with 5% Cabernet Sauvignon blended in and aged in French oak for six months, this was a delightful wine that also benefited from some airing out. Plenty of red fruit including cherries, cassis and raspberries on both the nose and palate with hints of lavender, earth, slightly spicy oak and mouth coating tannins. A decently long finish rounded up this Chianti with some fruit and espresso coffee coming together nicely.

Borgo Reale, Pinot Noir, Puglia, 2009: One of the few Italian wines I tasted that wasn’t made from an “Italian Grape”. While well made and eminently drinkable at 12.5% alcohol, I’m not sure what the point was in making an Italian Pinot. In any event, a well balanced wine with good structure, soft tannins, and near sweet fruit including red cherries, dried cranberries, cassis, overlaid with toasty oak and a hint of black pepper.

Borgo Reale, Signi, Brunello di Montalcino, Tuscany, 2005: We have had kosher Barolo, Chianti and Moscato galore but to my knowledge, this wine the only kosher Brunello available. While lacking the searing tannins of the typical Brunello (that usually require at least 10 years of cellar aging to settle down) which are one of the most distinguishing characteristics of this noble Italian wine, the wine is a pleasure to drink (if not necessarily worth the $50 price tag). As with most Italian wines I have tried, the various components needed some air to open up and play nice together, but once they did, the wine presented as a nice medium bodied wine that is much better with food than on its own. Hints of violets on the nose with nice red fruit, acid, soft tannins and oak on both the nose and palate, those well balanced after 15-20 minutes in the glass. Following the fruit were hints of graphite, cigar box and a touch of espresso leading into a medium finish. A few sommeliers with whom I tasted this wine, told me that it was nothing like a true Brunello (mostly due its approachability at youth and relative lack of complexity).

Cantina Gabirele Montepulciano d Abruzzo, Tuscany, 2008: I am not a big fan of most Cantina Gabriele wines as I usually find them to be slightly off balance with one of the fruit, acid or wood usually being somewhat overbearing (typically acid in the whites & wood in the woods) but not this one. A simple and easy drinking light to medium bodied wine; but one with nice red fruit including raspberries, cherries and cassis and soft caressing tannins that are near invisible with some pleasing bitterness rising up on the finish. A nice match with pasta dishes and I could even envision dropping an ice cube in this one on a hot summer day (gasp).