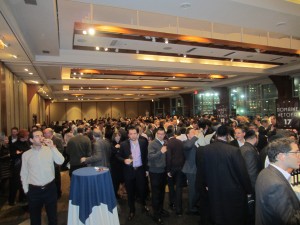 So KFWE was last night and, as always, I thought it was a great event – kudos to Gary J. and Royal for the hard work and all thier efforts and wishing all the West Coast folks a tremendous event tomorrow – enjoy. My newsletter this week will hopefully have a more detailed description of the event and some of the wine tasting highlights but I wanted to give a brief rundown of the event and some of the wines, a number of which weren’t listed on the posted wine list.

In a slight departure from past years, there was a early afternoon session for the trade from 12-4 which gave those attending the ability to chat with the varied winemakers in a much more intimate setting and have a more relaxed environment to do some serious tastings. At 4 they closed shop for people to recuperate and then reopened around 6 for an hour of press (although many of the press attended the earlier event including Alice Feiring and Howard Goldberg, both delightful individuals I was super-excited to meet, chat and taste wines with) before the event was opened to the general public at 7. Despite the throngs of attendees, for the bulk of the evening it wasn’t crazy crowded and most of the wines/winery representatives were accessible to all.

There was a really long list of winemakers in attendance, all of whom are listed in the book including Assaf and Sasson from Binyamina, Yaakov Berg from Psagot, Yoram and his wife Ilana from Alexander, the entire Covenant team of Jeff, Jodie and Jonathon, Jürgen from Capcanes, Pierre from Netofa (and Royal’s French Collection), Joe from Herzog, Irit and Ed from Barkan and other winery representatives including Adam from Carmel/Yatir, Dr. Moises from Elvi, Yossi Shor from 1848, Gilad Flam and Mayer from Shiloh. As every year and despite how exhausted many of them were, they all had time for any and all questions and seemed to enjoy discussing the wines (more early on than later

As far as wines, the list is endless (see my Thursday newsletter for more detail) but for me, some of the highlights included: 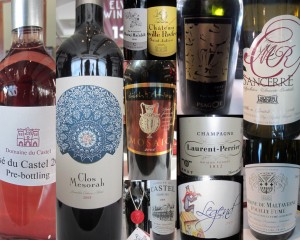 The new Covenant wines, especially 2011 SB which, unlike the 2010, didn’t do full Malo and was crisper w/ better acidity).

Flam, Reserve, Syrah, 2010 – a pre-release tasting of the Flam’s new level up wines

The food was great and I in my opinion has been a really successful addition, really enhancing the event and making it more inclusive. Way to much to taste (or list) everything but some favorites included the Po’ Boys from Bistro 1310, BBQ Ox Tail from ETC Steakhouse, the crazy decadent Chocolate Mousse from Finchi, Corned Beef and Pastrami from Pomegranate, Smokehouse Brisket from Gemstone Catering, Jack’s Chorizo, La Marais’ Smoked Duck Breast and off course the incredible Espresso from Noi Due, Ribeye Tartare from Downtown Brooklyn and the Dunk Confit Meatball and Veal Shepard Pie from Silverleaf Caterers.

Enjoy tomorrow’s event in LA and look forward to the reports!