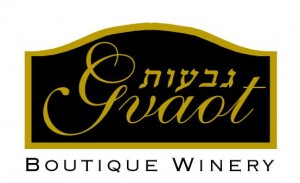 On my recent trip to Israel I had the opportunity to taste a number of wines from a new and very good winery – Gvaot. While these wines are not (yet) available in the United States they are very very good and well worth having someone bring a few bottles back. It is rare to find a winery whose first vintages have been as successful as Gvaot’s and while they are priced a little higher than one would expect for such a young winery, this has unfortunately become the norm in Israel. Boutique wineries, eager to recapture the significant expense in establishing the winery, tend to overprice the wines right off the bat which results is losing some significant market shares. In my opinion, the kosher wine consumers bear some responsibility as they tend to be willing to pay a much higher than necessary premium for top-notch wines.

The winery is located adjacent to Shiloh in the Shomron and the vineyards are planted at altitudes of 700 to 900 meters above sea level. The first vintage year was 2005 and was great. Production in 2005 was of 5,000 bottles and in 2006, approximately 12,000 bottles were produced from Cabernet Sauvignon, Merlot and Chardonnay grapes. In recent years Gvaot’s winemaker – Shivi Drori – has overseen the planting of Pinot Noir, Malbec and Gewürztraminer vineyards, some of which are destined for blending and some for future wines. Given the winery’s rising star, another good Israeli Pinot Noir might be on the horizon!

The Masada wines are the winery’s best and are usually cellared in oak for about two years. Gofna includes a number of interesting blends, including a Chardonnay / Cabernet Sauvignon blend. Yup – sounds pretty strange but it actually wasn’t bad – is a different funky kind of way. While not a wine that will earn a permanent place either in my cellar or on my table, it’s nice to see an up and coming winery have enough self-confidence to experiment with something completely unexpected.

Gvaot, Masada, Merlot, 2005: The first vintage year of this winery and a special treat. Enjoyed with some spectacular fresh goat cheese this wine was great and at its peak. A medium to full bodied wine, the tannins were completely integrated and had that sweet taste to them without being overbearingly cloying. An interesting mix of spices and fruit (the winery prides itself on its winemaking procedures intended to exert the most from the grape) including cherries, raspberries and red currants. Hints of chocolate prolong the enjoyment yielding to a long and supple finish.

Gvaot, Herodion, Cabernet Sauvignon, 2006: One of the things I like about this winery is that it has its own style. I haven’t tasted enough of its wines to ascertain what exactly that style is but for now I am going with funky (in a good way). A little too much wood on this one but given 10 minutes in the glass the wood dissipates and reveals layers of blackberries, plums, currants tinged with spiciness and an overly of herbaceousness. This will cellar for another few years.

Gvaot, Gofna Reserve, Cabernet Franc, 2007: In recent years Israel has turned out some really good examples of Cabernet Franc (including from Ella Valley, Recanati and Tanya – which I wrote about last week). This wine doesn’t disappoint and is destined to be a great wine. Opened a little early but enjoyed nonetheless, this full bodied wine will probably need another year in the bottle before its muscular tannins recede and allow its full potential to bloom. Lots of blackberries and plums to go along with the wood and already showing hints of elegance which will improve over the next 6-12 months.

Gvaot, Herodion, Cabernet Sauvignon, 2007: I liked the 2006 and, tasted side by side, the 2007 was better. For a table wine this was great. Depending on how it ends up priced when it finally makes its way here, this would join my growing collection of decently priced wines (although the powers that be seem to be working against me as the prices of many such previously “affordable” wines in the $10-15 seem to have been jacked up in the last few months). A medium to full bodied wine with loads of fruit this was a joy to drink. I got hints of spices and oak to go with the blackberries, black currants and cherries. A decent finish leaves you wanting more.