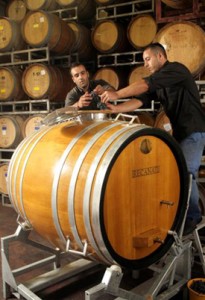 While I enjoy the a top-tier wine as much as the next oenophile, one of my greatest pleasures is to find really great wines that are decently priced, thus providing great bang for your buck. As any regular reader of this newsletter knows, together with the wines of Galil Mountain, I have always felt the Recanati Winery is one of the wineries who succeeds at providing great value wines. For some reason, Recanati is also a winery whose ability to produce truly fine wines seems to consistently fly below the radar. Looking through the archives of this newsletter, I was shocked to find that, other than a brief blurb five years ago, Recanati had never been given it’s due on these pages. So, here’s to Recanati and its delightful offerings…

Established in 2000 and located in Emek Hefer in the Sharon region, Recanati was the realized life-long dream of Lenny (Leon) Recanati, a banker and true oenophile, who got his start in wine from his parents who made their own wine from their backyard vines. The winery’s stated goal from day one was to produce quality wines at reasonable prices – a truly noble mission statement which, as Recanati celebrates its first decade, it has accomplished beyond his wildest expectations. In addition to providing good value, Recanati is another winery from who you can buy any of their offerings and, while not every wine may be to your linking, you never have to worry about a bad wine.

The founding winemaker of Recanati, the incredibly talented and delightful Lewis Pasco, returned to California a few years ago and was replaced as head winemaker by Gil Shatsberg – formerly of Amphore and considered by many to be one of the best in Israel. Lewis brought class, sophistication and a distinct style to Recanati, and was a driving force behind its rapid ascension into the lofty company of Israel’s top wineries. Gil has continued to elevate the winery and has imprinted the recent vintages with his signature style assisted by Ido Levisohn, another talented winemaker. Most of Recanati’s wines available today were conceived in the Lewis Pasco era, but Gil is the one making all the final decisions and the most recent vintages are all his creations.

The winery relies on their own grapes and sources additional grapes from certain contract vineyards, primarily in the Upper Galilee, including the highly-touted Manara vineyard. The winery produces wines in four series: their flagship wine, the Special Reserve, two varietal series, Reserve and Recanati and a table series called Yasmin. Recanati also produces some special edition bottles for Derech Hayayin (an Israeli wine store chain), including the awesome Petit-Syrah/Zinfandel Special Reserve I wrote about last year. Production is currently between 900,000-1,000,000 bottles annually.

One of the basic dilemmas in winemaking is the trade-off between earlier harvest (lower alcohol and higher acidity, but more “greenness”) and later harvest (better tannins and more developed flavors, but with the potential for “hotness” and green notes). At Recanati, where Gil and Ido seem to be pretty focused on creating ‘Israeli’ wines that will showcase the terroir without getting bogged down by the hot climate that leads to high alcohol, low acidity and an over-abundance of fruit with long and lingering finishes. Lewis Pasco’s baby in this regard was the delicious Petit-Sirah / Zinfandel blend, which is a good starting point for an “Israeli” wine. In comparison to the prior generation of Recanati wines, there is less greenness, a little more elegant fruit, higher acidity making for more food friendliness and smoother/rounder on the palate. They are making a concentrated effort to lower the alcohol percentage (target is a reduction of about 1% overall, which may not sound like a lot, but makes a difference and isn’t easy to achieve without sacrificing winemaking style). Some of the measures Recanati utilizes include slightly earlier harvest, to maintain good acidity and relatively short skin contact, to avoid the greenness which seems to be a personal pet peeve of Mark Squires (he covers Israeli wines for Robert Parker and doesn’t seem to quite “get” Israeli wines yet). The potentially lackluster color you get with short skin contact can be remedied by adding a small portion of grapes harvested a little later and granted longer skin contact. In short, Recanati is clearly joining the movement towards producing wines that are more reflective of the Israeli/Mediterranean terroir instead of aiming for California and Australian style wines as in the past that has been championed recently by Carmel (see their “Mediterranean” wine).

In addition to focusing on elegant wines with Israeli accents, the result of more subdued wines is lending itself nicely to less alcoholic and more food-friendly wines, which remain just as complex and sophisticated as their predecessors. I have also heard that the winery’s recent Merlot wines (from 2008 and 2009 in both the Recanati and Reserve series) are well worth seeking out and may help to catapult Recanati into the realm of Israeli wineries that do this grape justice (see my Ella Valley write-up from a few weeks back).

As with any large winery, listing even close to a representative of Recanati’s wines is far beyond the scope of this newsletter, listed below are a number of Recanati wines I have not reviewed in the past, one from each of their series.

Have a great week,
Yossie

Recanati, Special Reserve, 2006: My son Zevi’s first taste of wine was the excellent 2003 vintage at his Bris. Recanati’s excellence gets at least partial credit for Zevi’s clear preference for excellent dry red wine, for which I am most appreciative. While the 2005 wine was a blockbuster, the 2006 is a more elegant but still intense wine and was made under Lewis’ regime, so it probably doesn’t showcase the new direction of the winery as much as the 2008 blend will (which included almost 20% Petit Sirah whereby the 2009 has no Cabernet Sauvignon). Among the best priced so called “Super-Israelis” and a longtime favorite of mine, the Special Reserve continues to go from strength to strength. Every year sees different components and percentages making up this treat with the 2006 vintage comprised of 82% Cabernet Sauvignon and 18% Merlot and aged for almost two years in oak. The 2006 has plenty of robust tannins that are still in the process of getting acquainted with the fruit and acidity, but so far seem to be playing nice in the sandbox with the other kids. It presents with a bold and elegant structure that vindicates my loading up on this wine (in honor of Zevi’s birth year – hopefully to be enjoyed with the GHW’s Rom at his Bar-Mitzvah). I would hold off opening this wine for at least another year, probably closer to two, in order to allow for the various pieces to come together as they were intended. Dark royal purple in color, this is a softly full-bodied wine with a rich nose of blackberries, currants and black plums, together with cassis, slightly pungent forest floor and espresso, leading into a palate loaded with more black forest fruit, asphalt, fine bittersweet chocolate, spices and almost sweet cigars.

Recanati, Cabernet Sauvignon, Reserve, 2007: As you all know from prior newsletters, my favorite wine in this series is the Cabernet Franc, but this Cabernet Sauvignon is a delicious treat as well. While this wine is a classic representation of the varietal, the 2009 version should fully be a Gil and Ido production and I am eager to taste how they apply their style to this wine. The 2007 vintage is a brooding wine with strong tannins well integrated with the acidity and fruits. The wine opens (after a few minutes) with a rich nose and palate of black cherries and plums, raspberries, currants, hints of blueberries and thought-provoking spices, all overlaid with espresso and mocha and leading into a round and mouth-filling finish than lingers nicely.

Recanati, Chardonnay, 2009: You can immediately taste this difference between this wine and the majority of Israeli Chardonnays you have tasted – and it won’t be to every one’s liking. A medium- bodied and elegant old-world Chardonnay, with more crispy, flinty, minerals and high (but well balanced) acidity and less butter and oak than one would expect from an Israeli Chardonnay. Plenty of green apples, melon, red grapefruit and limes with a hint of vanilla and spicy wood throughout all leading into a medium and pleasantly creamy finish. This wine was partially aged in oak, with the balance of the wine in stainless steel tanks, which makes for a delightfully crisp and fresh experience which, for about $10 here in New York, is hard to beat.

Recanati, Yasmin, White, 2009: Probably the best summer wine in this price range (about NIS 35 in Israel) and a really surprising delight. Had I tasted this wine a few weeks ago, it would have without any doubt, débuted in my recent “Hidden Gems #3” newsletter, representing that genre better than almost any wine. A fruity, light and easy drinking wine with plenty of mouth-watering acidity to balance things out and make this an awesome outdoor picnic wine. Tangy and refreshing grapefruits, limes and summer flowers, in a crisp and refreshing blend of Sauvignon Blanc, French Columbard and Emerald Riesling with the sum of this wine being far greater than its parts. The below 12% alcohol further enhances its title as a perfect little summer quaffer.